The President of Equatorial Guinea, Teodoro Obiang Nguema, gave an exclusive interview to Sport News Africa. He talks... football. The 2015 African Cup of Nations hosted by his country, Nzalang Nacional, Cameroon vs Argentina (1-0) of the 1990 World Cup with Diego Maradona who "could not do anything" against Roger Milla and company ... The head of state of Equatorial Guinea seems to want to demonstrate that he does not consider himself as an "aficionado" just for the sake of it.

From our correspondent in Equatorial Guinea,

Teodoro Obiang Nguema: (Laughs) Yes of course, like most of my compatriots.

What explains the passion for football in your country?

You know, for years, football in Equatorial Guinea has alternated between the best and the worst. It is sometimes high level and sometimes low level. When Equatorial Guinea hosted the CAN in 2015, Nzalang Nacional reached the semi-finals. This had not been the case in the past. But in recent years, it seems that they have not progressed much. Fortunately, the country has qualified for the CAN, which will be played in Cameroon next year.

Do you think the Nzalang will repeat the 2015 success or even do better?

Our hope is that the players will be professional so that their game will allow them to at least pass the first round and - why not - reach the semi-finals or even win the title. This is not impossible. And if they do, the people of Equatoguinea will be grateful. For the moment, we are trying to make our national team competitive so that it is capable of winning trophies. 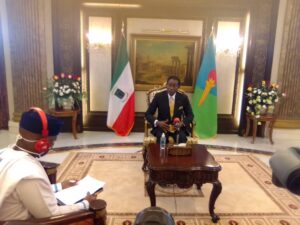 The Equatoguinean President during the interview with our correspondent.

Between 2000 and 2012, you undertook extensive construction work on sports infrastructure, especially for football. Why did you make these investments?

We are above all aficionados and our duty is to promote sport. Not only football, but all other disciplines. Before Equatorial Guinea organized the AFCON, we did not have football stadiums. We already have several stadiums and we still need to build more. For example, we want to build stadiums in each of the eight provinces of the country. There are still the provinces of Annobon, Djibloho, Bioko Sur and Centro Sur, which do not yet have sports facilities. The women's national team surprisingly won two African cups. And that made us proud. Inspired by this example, we have the duty to train a new generation of sportsmen and women who will have the necessary capacities to make us win titles and competitions.

"At the 1990 World Cup, Cameroon so proudly demonstrated the merit of African football by beating Diego Maradona's Argentina with mastery. Argentina had a hard time of it.''

When will the AFCON return to Equatorial Guinea?

Everything depends on CAF and FIFA. It's not up to the governments to decide, even if they sometimes have their say. The AFCON that we organized in 2015, for example, was a proposal from CAF after Morocco withdrew due to the spread of the Ebola epidemic at the time. We responded favorably to the call of CAF through its then president Issa Hayatou. We did not want it to end up being played in a Gulf country.

What do you think African football lacks to compete with the great football nations and, for example, win the World Cup?

African teams are already participating in the world championships and I think they are getting stronger. I still remember a World Cup in 1990 when Cameroon so proudly demonstrated the merits of African football by beating Diego Maradona's great Argentina team. Argentina had a hard time of it. They had a hard time that day. Maradona suffered and could not do anything against the valiant Cameroonians. Today, several Africans play in the biggest European leagues. This means that African football has come a long way. We hope that at some point an African country will win the World Cup.