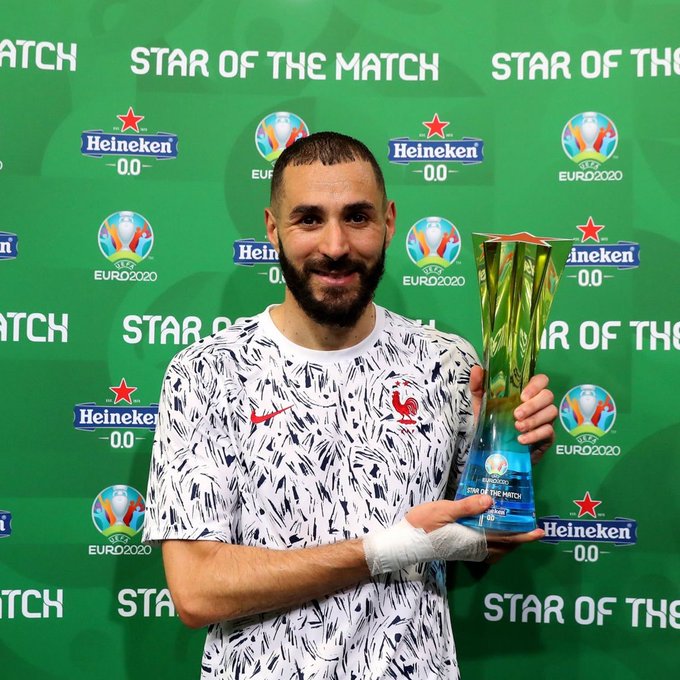 After 339 minutes of silence since his return to France, Karim Benzema scored twice against Portugal in France's last game in Group F of Euro 2020. He was named Man of the Match.

Thanks to this draw, Les Bleus finish at the top of their group. They avoid England  and Belgium, two opponents more formidable on paper than Switzerland they will face in the round of 16.

"I had missed scoring for the national team.''
'' I felt a lot of happiness and pride when I scored the penalty," the French striker told BeIN Sports, referring to the first of his two goals. '' I know that everyone was waiting for that. And I was under a lot of pressure. But I'm a professional so I need that pressure too. I'm happy because I know that in this competition goals are very important.''

The last time Karim Benzema found the net for the French national team was in 2015 in a friendly against Armenia. He had signed a double. This was followed by a period of almost six years in the wilderness. First in friendlies, against Wales (0-3) and Bulgaria (0-2), then at the Euro, against Germany (0-1) and Hungary (1-1), the Madrid striker remained silent for 339 minutes. The two goals he scored against Portugal were a breath of fresh air for him. "I'm used to scoring at club level but I missed it at national level," he said.