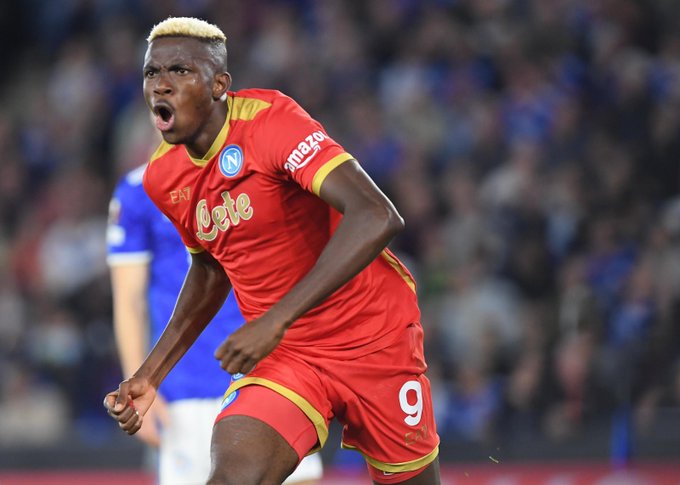 The first day of the Europa League group stage was played on Thursday 16 September. Six Africans distinguished themselves with goals.

Krepin Diatta is off to a good start in the Europa League. The Senegalese midfielder gave Monaco the win. His header from a Golovin cross (66th) was enough for Monaco to win at home against Austrian side Sturm Graz. AS Monaco are top of Group B, ahead of PSV Eindhoven and Real Sociedad, who drew 2-2.

Osimhen snatches a draw
His club did not win but he put in a masterful performance. He is Victor Osimhen. The Nigerian striker saved Napoli from a last-minute defeat. With the visitors trailing 2-0 to Leicester, Osimhen reduced the deficit in the 69th minute before doubling the lead (87th). That was enough to bring home a draw.

His compatriot Paul Onuachu also made his presence felt this evening. The 23-year-old striker got his European campaign off to a good start by scoring the only goal for FC Genk (23rd) against Austrian side Rapid Vienna. It was his 50th goal for the Belgian club. Genk are now in second place in Group H behind West Ham, who beat Dynamo Zagreb 2-0.

Ekambi and El Arabi delight, Samatta unlucky to score
Toko Ekambi was a key figure in Lyon's 2-0 win over Glasgow Rangers. The Cameroonian opened the scoring (23rd) with a curled shot. .

The Tanzanian Mbawana Samatta was also decisive Thursday evening. The 28-year-old scored the only goal for Royal Antewerp. Trailing in the 52nd minute to Olympiakos after Moroccan El Arabi scored from an assist by Guinea's Mady Camara, Samatta equalized in the 52nd minute. But the Greeks snatched victory (2-1), in the last minute (87th)