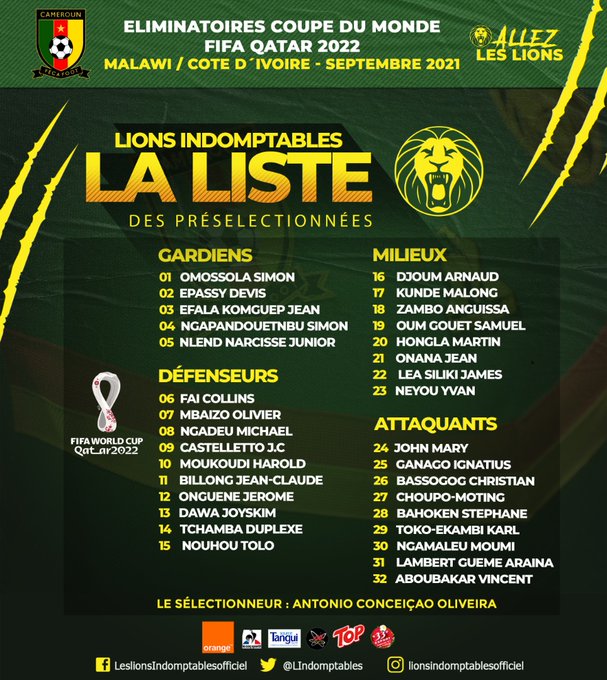 The head coach of the Indomitable Lions of Cameroon Antonio Concecao has today August 11, 2021 made public a list of 32 players pre selected to camp ahead of the 2022 Fifa World Cup qualifiers.

The games will be coming up in the month of September and the Lions will face Malawi and Ivory Coast.

Major absence from the list has been making headlines in Cameroon as Clinton Njie and Fabrice Ondoa, two members of the 2017 AFCON winning team have systematically lost their places in the Lion's den.

Attacker Njie has not had a great season since joining CSKA Moscow in the Russian topflight, while shot-stopper Ondoa has not been consistent between the sticks for any club in the last two seasons.

On the flip side, there are some new comers in the team.

Coton Sport's keeper Junior Narcise Nlend has finally convinced the head coach with his fantastic exploits this season in the CAF Confederation Cup. His former team mate and striker Lambert Araina who helped Coton Sport reach the semi finals of the continental competition also has been compensated after his signature with AS FAR of Morocco.

2017 AFCON's MVP Christian Bassogog also makes a return to the den after a short while.

The list will be streamlined from 32 to 23 well before the games in September.