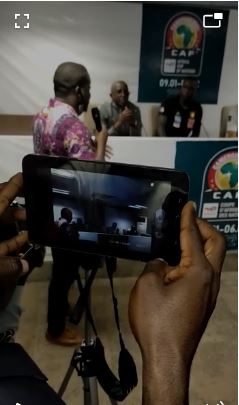 An almost scandalous scenes at the conference hall of the Ahmadou Ahidjo stadium in Yaounde, Cameroon's capital city. The venue was to host the pre match press conference which had to see journalists come up against both Cameroon and Malawi delegations at 6 pm local time, ahead of the World Cup Qualifier between both nations, slatted for Friday September 3 at the newly constructed Olembe sports complex.

A note from FECAFOOT has been circulating prior to the presser, saying that not even media persons nor journalists will be allowed to cover the game owing to Covid 19 protocols stipulated by CAF and FIFA.

The President of the Littoral branch of the Cameroonian Association of Sports Journalists (AJSC) made sure the hall was emptied as the disgruntled Cameroonian journalists could not understand the actual reason behind the FECAFOOT note.

An anonymous journalists is quoted to have said: ''There is something fishy about the said Olembe stadium. I can not understand how just yesterday I covered the game between CAR against Cape Verde at Japoma in Douala only to be denied access into the Olembe stadium while my national team is playing''

The situation has raised many dust surrounding the state of the said edifice. Other suggestions hold that the press zone of the stadium is not fully ready, reason why the press is conspicuously left out of the picture ahead of Friday's encounter.

A strong message  to the CAF and FIFA. Cameroonian journalists and media family is not happy with the recent decisions concerning the Indomitable Lions. First the 10.000 supporters demand was rejected meaning the 12th player will be left out. Secondly, journalists and media persons have been disrespected and will not take things lightly.