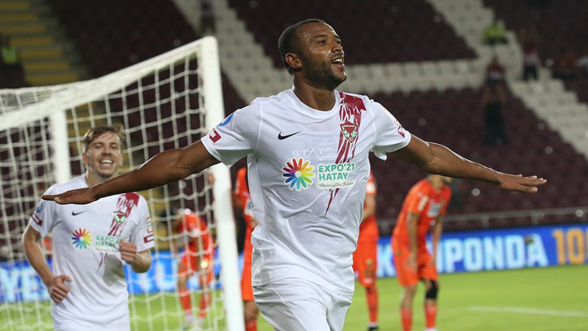 Ayoub El Kaabi's first start and first goal in Europe. The Moroccan striker took part in the beautiful victory of his team, Hataspor in Super Lig. A perfect debut for this formidable striker.

Ayoub El Kaabi has already made a name for himself. The Moroccan international striker (10 caps, 2 goals) played a part in Hatayspor's victory this weekend. His team won with a score of 5 goals to 0. It was during the 3rd day of the Turkish Süper Lig.

The Moroccan striker took advantage of his first start to score his first goal in Europe. The 28 year old player starts his adventure in the best way possible.

This was the player's second appearance with Hatayspor. He had indeed participated in the match against Galatasaray on 23 August. He took the place of Senegalese Mame Biram Diouf.

At 28, El Kaabi is finally discovering European football, much to the delight of observers and fans. His performances in Morocco have finally convinced a European club to acquire his services. Hatayspor, 6th in the last Turkish championship, made his arrival official on Friday 20 August.

Ayoub El Kaabi has finished writing his legend in Africa. In the Moroccan championship, he finished top scorer in 2017 with 25 goals. This was in the colours of Racing Casablanca. He then repeated this performance last season with Wydad Casablanca. This time he scored 18 goals.

El Kaabi has also won the African Nations Championship (CHAN) twice, in 2018 and 2021. In fact, he is the top scorer in the history of the competition with 12 goals.

Ayoub El Kaabi, however, has played outside the continent before going to Turkey. He had indeed tried an experiment in China, at Hebei China Fortune. He signed there in July 2018 but with the coronavirus pandemic, he decided to return to Morocco.

Adel Chedli, a former Tunisian international, describes him as "a mix between Didier Drogba and Samuel Eto'o" with a touch of "Florent Malouda because he is left-handed". Hopefully this comparison will also translate into success for these players in Europe.