Chelsea Football club of London are in the form of their lives. After winning a trophy at the end of last season, the Blues have kick start the 2021-2022 season with another win and another trophy.

The champions League holders comfortably led Villareal 1-0 in the first half of the European Super Cup in Belfast, Northern Ireland.

The Blues completely dominated the first half with Morocco's Hakim Ziyech making all the difference with a fine finish on the half hour mark (27th minute) .

The Moroccan finished off a fine cross from Harvert to put the London side ahead.

Edouard Mendy continues his fine exploits from last season with a great save to keep the lead for his side on 33 minutes.

At the 35th minute Ziyech almost turned provider for Marcus Alonzo whose low short was met by a firm left hand from the Villareal keeper.

A minute later same Ziyech found Zouma in the penalty area but the defender missed from close range.

Five minutes to half time the Moroccan was substituted after he picked up a hand injury. He was replaced by Christian Pulisic.

The Spanish side came stronger in the second half of the game creating more chances and stealing possession. Last season's top scorer Gerard Moreno got the equalizer for the Yellow Submarines at the 73rd minute.

The game was stretched into extra time and both sides showed signs of fatigue and clearly waited for the nerve wrecking shootout exercise.

Chelsea made a remarkable switch between the sticks as Edouard Mendy gave way for Kepa to handle the penalty shoots. A very appreciated move as the Spanish keeper made two important saves in the shootout. Chelsea won 6-5. 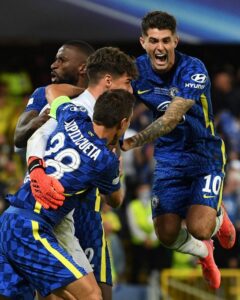 The London side has now won a second trophy under German coach Tuchel. They win the Uefa Super Cup for the second time in their third attempt.