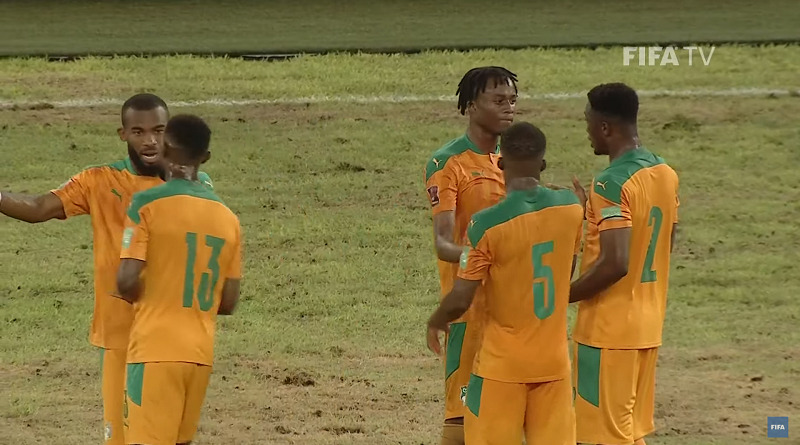 Ivory Coast showed a lot of realism against Cameroon (2-1) during this 2nd day of the 2022 World Cup qualifiers. The "Elephants" conserved all three points during the first period by scoring two goals thanks to Sebastien Haller and then manage the second.

History will not repeat itself on Monday night as the Indomitable Lions were tamed by Ivory Coast in a hugely contested encounter on Monday night.
The match was played on the pitch of the Alassane Ouattara stadium, which was not worthy of the magnitude of the game.

Cameroon made four changes from the team that comfortably beat Malawi in Yaounde 2-0 last Friday.

Zambo, Bassogog, Dawa and Tchamba were filled into the starting lineup.

The Ivorian side instead reserved their star players Max Gradel and Sere Die.

Indeed they were not needed as Sebastien Haller was up front for the home side who immediately pressed on their opponents. The fans incessant mobilization cheered the home team into an upward spiral, leading to swift wing attacks. Geremi Boga was fowled just outside Cameroon's penalty area. The resulting free kick was ill handled by Aboubakar Vincent resulting to a penalty. 20 minutes into the game, Haller made no mistake from the spot to put the Ivorians ahead.

The home side grew in confidence with the opener and came knocking nine minutes after. Haller out paced Ngadeu to slot home his second goal of the night.

The Ivorians who completely dominated the game went on break with a two goal lead.

In the second half, however, Cameroon came back on the pitch with a lot more bite, making two changes. Toko Ekambi and Stephan Bahoken came on. The "Indomitable Lions" pushed forward and were rewarded on the hour mark. A penalty, whistled by the Algerian referee Charef, allowed Moumi Ngamaleu to reduce the score (2-1).

The Ivorians went into game management mode, conserving the ball for as long as they could while Cameroon desperately pushed for an equalizer that never came. Despite dominating with 60% of possession in the second half, Cameroon attacked the goal three times, two of them on target. They obtained 5 free kicks, placed 33 dangerous attacks (against 17 for the Ivory Coast).

With the (2-1) win, the boys of Captain Serge Aurier temporally hold on the lead in group D with 4 points and Cameroon follows (2nd, 3 pts). Mozambique (3rd, 1 pt) can however be co-leader of the group in case of victory over Malawi, Tuesday, September 7.

Th defeat has left many question marks on the minds of many Cameroonian football fans. The readiness of the Indomitable Lions, coach's selection criteria and choices, CAF and FIFA's inspection missions who validates playing turfs for this qualifying round and many more.