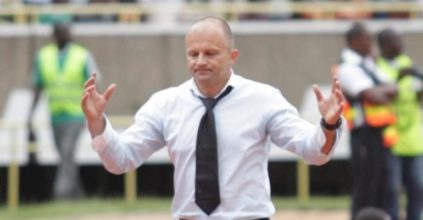 The Zimbabwe Football Association (ZIFA) has finally bowed to pressure from fans. The fans were demanding the head of the coach. In the end, the body followed the popular will and sacked Zdravko Logarusic. "The decision to sack Logarusic has been confirmed. The decision to sack Logarusic was confirmed following a meeting of the ZIFA executive committee in Harare on Sunday," read a statement in the local press.

In a statement issued by the federation, the ZIFA spokesperson explained the reasons. Xolisani Gwesela said the board had unanimously agreed that Logarusic's contract was now untenable. "The Zimbabwe Football Association wishes to inform the football world. As well as the nation as a whole that it has amicably parted ways with the senior men's team coach Zdravko Logarusic," Gwesela said.

"The decision (to sack the coach) was taken after consideration by the executive committee. And in full of all the various relevant circumstances relating to the coach's contract. The entire technical team has also been dissolved," the same source added. "The appointment of the interim technical team will be announced in due course. The Executive Committee has already launched the process," the Federation's statement continued.

With Logarusic at the helm, the Warriors exited the competition in the first round of the African Nations Championship (Chan) and the COSAFA Cup.

After that, the Warriors also blew a wild card for a place at the Qatar 2022 World Cup. Zimbabwe are bottom of Group G. With only one point from their first two matches against South Africa (0-0) and Ethiopia (1-0 loss).

Logarusic has led the Warriors' worst series. Under his watch, they won only one of fourteen matches. They have also drawn five games and lost eight since his appointment in January 2020. Enough for the FA to make the decision to sack him.