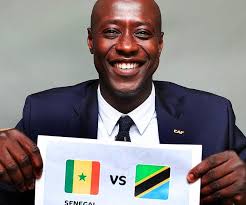 The Summit, the first of it’s kind in the East and Central African region will take place July 30-31st at the Hyatt Regency.

Peter Simon, the Chief Executive Officer (CEO) of Afrisoccer, the organizers of the summit, told Sport News Africa that the two legends arrived yesterday. “We are happy to have legends come to make presentations where a lot of football ideas will be exchanged by experts from around the world,” added Peter Simon.

Mboma, a former national team player with the Indomitable Lions of Cameroon who was also voted 2000 African Player of the Year will be a panelist to discuss the topic: Revenue generation sources and financial issues associated with football.

Fadiga, a former national player with Senegal who also featured for English Premier League side Bolton Wanderers will also make a presentation expected to attract over 200 participants.

Ria Ledwaba, the Vice President of the South Africa Football Association (SAFA) will also make a presentation under the topic football marketing and sponsorship.

The Summit which was originally meant to take place March 18-19th was postponed following the death of the then President of Tanzania, Dr. John Pombe Magufuli in March.

Several topics including football marketing and sponsorship, stadium management, E-sports and digital platform in football, revenue generation sources and financial issues associated with football, development of youth and women football and intermediary services in football will be discussed.

Jamil Sewanyana, and CAF Security Officer and managing Director of Mandela National Stadium in Uganda together with Simba Sports Club CEO and La Liga representative for Tanzania and Rwanda Alvaro Paya will also be among some of the other speakers at the Summit.