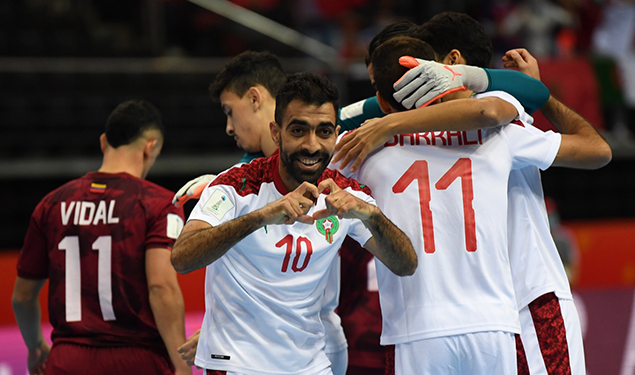 Morocco will face Brazil this Sunday, September 26, for a historic quarterfinal of the Futsal World Cup. The Atlas Lions may not be favorites against the Brazilians, but they do have a few trump cards up their sleeves that could make things difficult for their opponents. Soufiane El Mesrar is one of them.

Morocco knows it is not the favorite but it does not intend to present itself as an expiatory victim against Brazil, which it faces this Sunday, September 26, in the quarterfinals of the Futsal World Cup. The coach of the Atlas Lions, Hicham Dguig, made this known after the round of 16 victory over Venezuela (3-2) at the Zalgiris Arena in Kaunas, Lithuania. His next opponent, at the Vilnius Arena, is indeed the most successful team in this competition (5 titles). But the Moroccans are not lacking in assets. First of all, there is Soufiane El Mesrar.

The ACCS Paris player has already scored four goals in this competition, including a resounding hat-trick in the eighth round. In the group stage, he has often sparked dangerous attacks, but the clumsiness of other players or the solidity of the opposing goalkeepers has often kept the Atlas Lions at bay.

Soufiane El Mesrar is a star of Moroccan futsal. He shone with AS Dynamo Kenitra, the best club in the country which he joined in 2010, finishing twice Moroccan champion (2016-2017 and 2017-2018). He added to his list of achievements by winning the Throne Cup in 2018. That same year, the player moved to Montpellier Méditerranée Futsal with his compatriot Bilal Bakkali. With the Mediterranean club, they finished fifth in D2, before his team was excluded from all competitions for "extra-sportive reasons". Then came the stage of ACCS FC, a club he joined with Bakkali.

El Mesrar is a regular in the national team. He took part in the 2012 and 2016 World Cups, during which Morocco failed to progress beyond the group stage. However, these failures will be mitigated by the two African Championship titles won in 2016 in South Africa and in 2020 on home soil. On both occasions, El Mesrar scored three goals in the competition, including a brace in the 2020 final against Egypt (5-0).

Between the two AFCONs, the ACCS Paris player also shone at the Changshu international tournament (China), where he finished top scorer.

Eight years of work
El Mesrar remains confident for the rest of the competition and assures that the results of the selection were expected. "This result doesn't just happen by chance. It's been eight years of work with Hicham Dguig," he told FIFA.com after the round of 16. The federation has put a plan in place to develop Moroccan futsal. Today, we're reaping the benefits and we're proud of ourselves.

The player dreamed of playing against Brazil. Morocco had scheduled friendlies against the Brazil and Argentina, but these matches were cancelled. The quarter-final is a great opportunity to finally face the South Americans. "If you play three World Cups and you never play Brazil, it's frustrating! I finally have this chance for the first time," he said.

El Mesrar, like his team-mates, respects Brazil, but does not intend to be an expiatory victim. Everyone knows this team, its history, its stars," he admitted. We know it's going to be a tough game, we know we'll be under pressure, and we'll have to defend very well.

KAUNAS, LITHUANIA - SEPTEMBER 16: Worasak Srirangpirot of Thailand is challenged by Youssef Jouad of Morocco during the FIFA Futsal World Cup 2021 group C match between Thailand and Morocco at Kaunas Arena on September 16, 2021 in Kaunas, Lithuania. (Photo by Angel Martinez - FIFA/FIFA via Getty Images)

Morocco can also count on a player who shines in Lithuania: Youssef Jouad. Scorer of two goals in this competition, Jouad finished top scorer (7 goals) of the Arab Cup played in Egypt and best player in the final. The 21-year-old is known for his versatility, his ability to defend and his ability to get forward quickly to score.

He is a spectacular player," Graeme Dell, the world governing body's futsal instructor, told FIFA.com. ''He uses his versatility to move freely on the pitch. He has shown the extent of his potential.''

Jouad is one of the five most anticipated young talents at this World Cup. At this stage, he has assumed that status with flying colors.