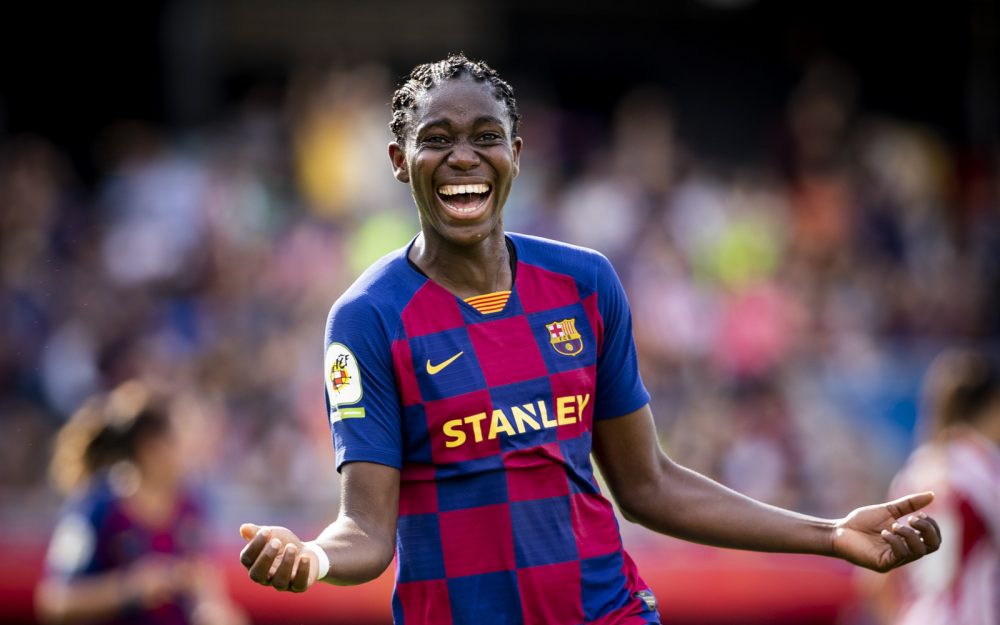 Asisat Oshoala has returned to training with Barcelona after recovering from a ruptured posterior cruciate ligament in her right knee injury on Friday, December 17.

The Nigerian limped off in pains during their UEFA Women’s Champions League encounter against Hoffenheim on  November 10 and was estimated to be sidelined for at least two months, which somewhat puts her in doubt for the 2022 Africa Women's Cup of Nations qualifier match against Cote d'Ivoire in February.

There is a glimmer of hope that the Barcelona number nine could return to action before February 2022, following her early return to training just a month and five days since the successful surgery on her knee.

The 28-year-old has missed seven matches in total over the past 38 days, including Barcelona's 4-0 away victory over Arsenal in the Champions League group stage nine days ago.

She could, however, now come back into the squad in coming days, having commenced her gradually return to full fitness with an individual training during the club's latest practice session at Estadi Johan Cruyff.

Barcelona officially welcomed the reigning African Women's Player of the Year back into the fold via their social media account, writing on Instagram: "Step by Step!!"

Returing Jenni Hermoso has led the attacking line in the striker’s absence, but manager Jonatan Giraldez is keen to have an extra option to recall a woman who has been in superb form since the start of the 2021-22 campaign, as Barcelona aim to revive their stuttering ambitions of defending their domestic crowns along with the European title.

They are currently sitting top of the Spanish table, 11 points ahead of closest rivals Real Sociedad, having accrued 39 points from 13 matches. And injured Oshoala still remain the team's topscorer and league's joint topscorer with Madrid's Geyse on 11 goals despite the Nigerian has missed out in the last four league ties.

On the international scene, this is a massive boost for Randy Waldrum's Super Falcons who are eyeing a berth at the expense of Cote d'Ivoire in bid to defend their African title in Morocco next year.

The Lagos-born star faces fresh challenge at the international level as she is yet to find the back of the net for Nigeria in her last six appearances since scoring a treble against Equatorial Guinea at Turkish Cup back in February 2022.

Aside from that, she will also carry on her shoulders as the team's captain the task of avoiding a back-to-back crash to the Ivorians following October 2019 elimination in the African qualifiers for the Tokyo 2020 Olympic in Lagos.