Ivory Coast: The 25 Elephants for Burkina and Ghana games 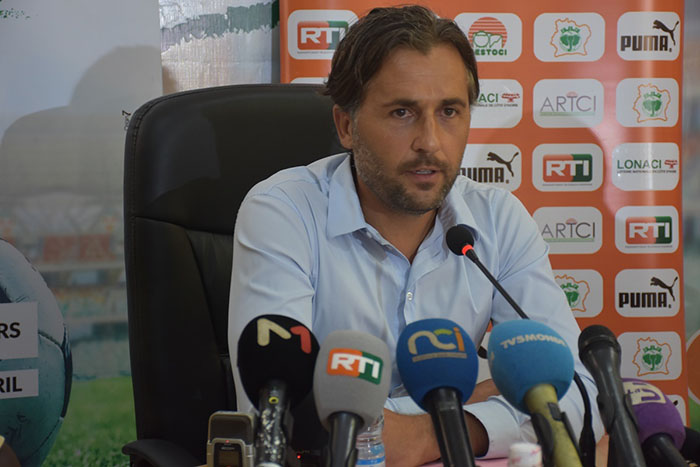 Ivory Coast: The 25 Elephants for Burkina and Ghana games

Four of the 25 Elephants selected for Côte d'Ivoire's two matches against Burkina Faso and Ghana in June are joining the national team for the first time.

Côte d'Ivoire will play two friendly matches during the next FIFA window (31 May to 15 June). They will face Burkina Faso on Saturday 5 June at the Ebimpé stadium (suburb of Abidjan), before taking on Ghana a week later, on 12 June, in Cape Coast (165 km from Accra, the Ghanaian capital).

In preparation for these matches, the national team coach, Patrice Beaumelle, unveiled on Thursday 20 May at the headquarters of the Ivorian Football Federation (FIF), a list of 25 players. The group includes four first-timers: Wilfried Singo (Torino, Italy), Hassane Kamara (OGC Nice), Serge Aka (Ei Gouna, Egypt) and Hamed Junior Traore (Sassuolo, Italy) are joining the squad for the first time.

Third goalkeeper to be named

Although Beaumelle announced a list of 25 players, only 24 names were revealed to the press. The third goalkeeper of the group, will be known at the end of the training camp of the local Elephants which will take place from 24 to 30 May.

According to the French coach, the choice will be made in consultation with his colleague of the local team, Maxime Gouaméné. The place will be played between Eliezer Ira Tapé (FC San Pedro), Cissé Abdoul Karim (Asec Mimosas), Ndrin Ulrich Edan (Afad) and Danté El Hadj (Africa Sports).

The Elephants are motivated

Despite the friendly nature of their next two outings, the Elephants have told their coach their motivation. "I would like to thank them for this motivation," said the national team coach in a press conference.

Asked about the value of his opponents, the technician revealed that the list of Burkina Faso that he consulted reveals "a good team" that he "respects". "We will play in the spirit of winning," he said, indicating that the same spirit of conquest will be in place against Ghana.

In the latest FIFA rankings, Côte d'Ivoire (59th) is just ahead of Burkina Faso (60th) and ten points behind Ghana (49th).