Nigerian Paul Onuachu and Ghanaian Joseph Paintsil led Genk to victory in the 8th round of the Jupiler Pro League on Sunday. The Genk team managed to turn the match around (1-2) thanks to the goals from their two African strikers.

KRC Genk and Paul Onuachu were expecting a tough match against Saint Trond on Sunday in the 8th day of the Jupiler Pro League. The Nigerian striker and his team were well served. In front of their home crowd, STVV took the game into their own hands from the very first minutes of the match. The home side was pressed and even had a goal in the added time of the first half (45+3). Thus, the visitors KRC Genk went back to the locker room at half-time, trailing by 1-0.

At the beginning of the second half, John Van Den Brom's team started the revolt. They took the game in their own hands and pushed forward, but were unable to find a way through. Coach Van Den Brom then decided to bring more presence in the zone of truth of the opposing team; he thus launched his providential striker, Paul Onuachu, left on the bench at the beginning of the match. But also, the Ghanaian striker, Joseph Paintsil.

The two men were to hit the target. First, the Ghanaian scored his team's equalizer in the 73rd minute. Ten minutes after the equalizer (83rd), the liberation of Genk finally came through their providential striker, Paul Onuachu, who sealed the fate of the match. 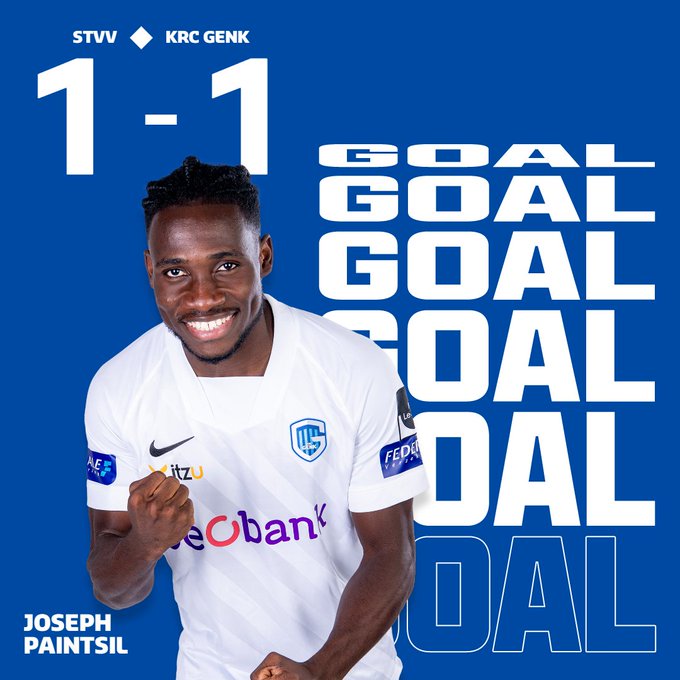 KRC Genk won the game (1-2) and took the 3 points in this very competitive game. They are now on the podium (3rd, 14pts) of the championship with one game left. Paul Onuachu, who scored for the fourth time this season, is now the top scorer in the league. As for his teammate, Joseph Paintsil, he opened his goal counter after 2 matches played.