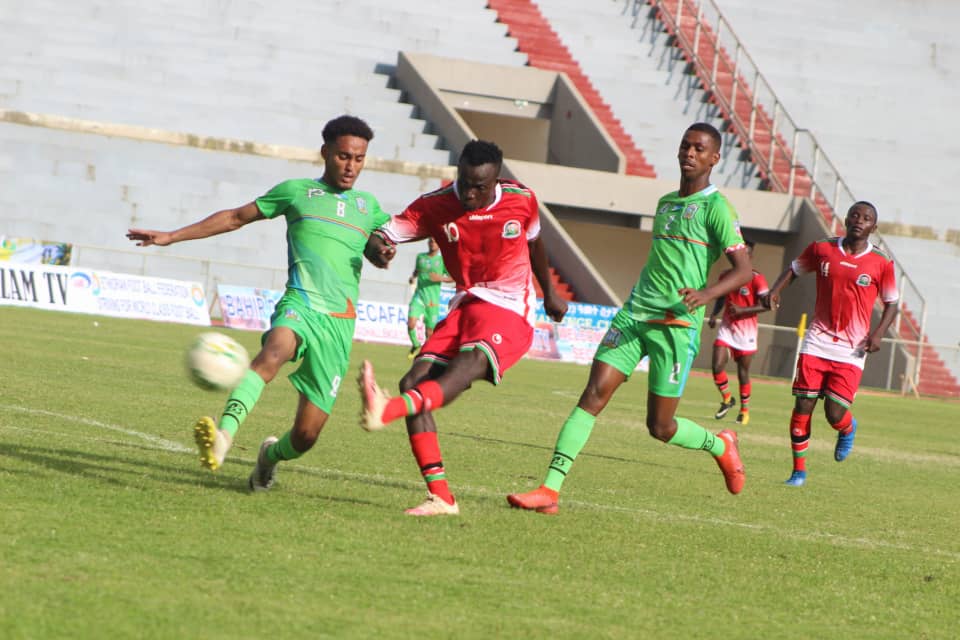 Kenya’s Emerging Stars have humbled Djibouti 3-0 in their opening Pool C match played on Sunday at the on-going CECAFA U-23 Challenge Cup in Bahir Dar, Ethiopia.

The Kenyan team took control and dominated the game before Paul Regan Otieno gave them the lead after 11 minutes with a well taken shot that settled in the corner of the net.

With a minute to half time Djibouti’s Idriss Mogueh dribbled past two defenders but his shot missed the target.

In the second half the Djibouti team returned charged and closed most of the spaces. Hafid Said Awad had a chance for Djibouti after 54 minutes, but blasted wide.

After 64 minutes Otieno netted his second goal when he nodded in a well taken freekick. The Djibouti team continued to push forward to look for goals, but failed to break the Kenyan defending line.

It was substitute Benson Oluoch Ochieng who made it 3-0 for Kenya after 88 minutes with a well calculated header past Djibouti’s goalkeeper Nasredin Abdi Aptidon.

Kenya’s coach Stanley Khayo Okumbi praised his boys for the good show. “We need to continue working hard because there are more games to come. We need to prepare well for our next game against South Sudan,” said Okumbi.

Djibouti’s coach Julien Mette said he was not so impressed with the way his team defended. “We tried to play good football, but the defending was bad,” said Mette.

In an earlier match Uganda and guest side Democratic Republic of Congo settled for a goalless draw in a Pool A match. On Saturday Eritrea held hosts Ethiopia to a 3-3 draw in a Pool B match.

Action will return on July 20th with Burundi facing Eritrea in the second Group B match of the competition.