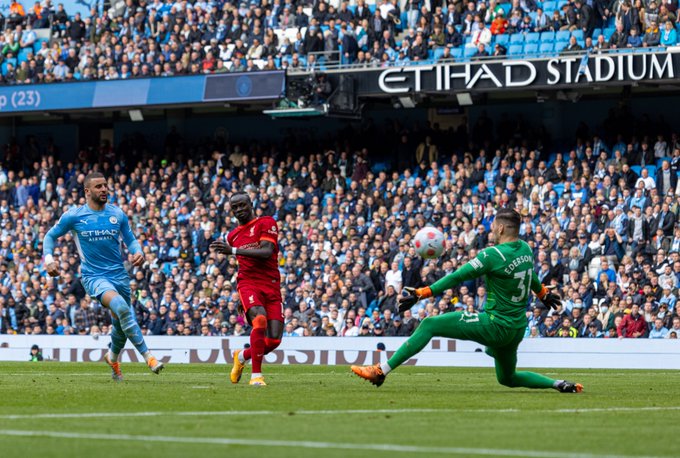 After squaring out in last week's possible title decider in the English Premier League, Liverpool and Manchester City met in the semi finals of this season's FA Cup on Saturday evening. This time the game was at a neutral venue, the Wembley Stadium.

Jurgen Klopp's Liverpool are one game away from winning the only trophy missing from their trophy cabinet. The Reds, who have won the Premier League, Club World Cup, European Super Cup, League Cup and Champions League since the German coach took over in 2016, have just reached the FA Cup final. And they can thank Sadio Mané.

The Senegalese is walking on water at the moment. He proved it again this Saturday at Wembley against Manchester City (3-2). After Ibrahima Konate's opener, Mané scored twice to give Liverpool a 3-0 lead at the break.  Manchester City's keeper Zack Stephen made the worse of a back pass to gift Sadio Mane Liverpool's second goal. Two very important goals because the Skyblues scored two goals in the second half but ended up losing 2-3. In the final, Liverpool will face the winner between Chelsea-  and Crystal Palace. The two London clubs will face each other tomorrow Sunday April 17.

Chelsea who dropped out of the UEFA Champions League will have all their attention tilted towards winning the FA Cup for them to save a barren season ahead. The Blues are currently logged third on the Premier League League standing.