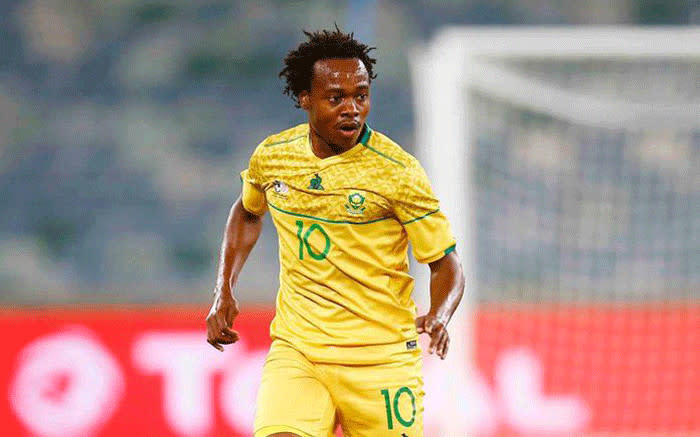 South African national team coach Hugo Broos has raised concerns over Al Ahly striker Percy Tau, who has withdrawn from the squad due to injury.

This is not the first time under Broos that Tau has withdrawn from the team with an injury and  is hoping that. Tau has since been replaced by Victor Letsoalo, who plays for Royal AM in the DSTV Premiership.

Bafana Bafana, as the team is affectionately known, are due to play against Guinea in Belgium on Friday, 25 March, and reigning world champions France on 29 March in the city of Lille.

“I was very happy yesterday [Sunday] after the screening by the doctor that I have the 23 players I wanted from the beginning, except Percy,” the former Cameroonian national team coach was quoted as saying on Sowetanlive.co.za.

“He's injured again. It's becoming a little problem with Percy. Since I've been here, he had his problems with his transfer to Al Ahly [from Brighton] so he wasn't ready for the two [World Cup qualifying] games [against Zimbabwe and Ghana, where Tau played not entirely fit].

“He went to Al Ahly and then he was injured for the two games against Ethiopia. Because of that injury in the two last games against Ghana and Zimbabwe he was not 100%.

“Now he's injured again. I hope one day it will stop with him. He's a very important player for us.

“But I'm also a bit afraid if that goes on we will have problem with Percy for June. Again he will be out for weeks with a knee problem, so that is not a good thing for us.”