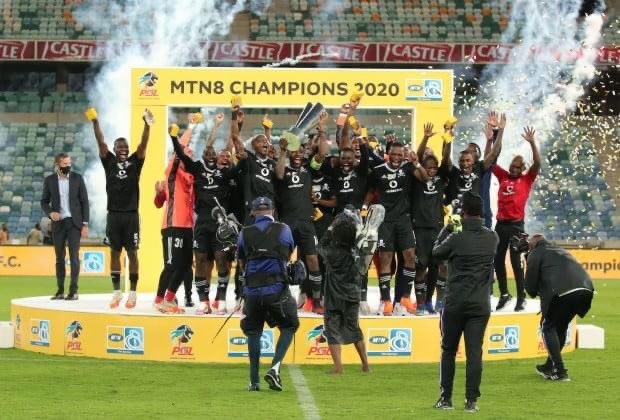 Orlando Pirates won the 2020 edition of the MTN8

The 2021/22 Premier Soccer League season in South Africa will kick off with the MTN8, on Saturday, 14 August.

The knockout competition features clubs which finished in the top eight in the Premiership. In this year’s edition, Mamelodi Sundowns, AmaZulu, Orlando Pirates, Golden Arrows, SuperSport United, Swallows FC, Cape Town City and Kaizer Chiefs will take part in the competition after the sides finished from number one to eight respectively last season.

Pirates go into the competition as defending champions after winning it last year and will start their campaign this season against Soweto rivals Swallows FC at Orlando Stadium on Saturday, 14 August.

On the same day, Golden Arrows will take on SuperSport United at Princess Magogo Stadium. Arrows had a good campaign last season and are determined to start well and prove that their performances were no fluke. SuperSport, however, have a good record in the MTN8 in recent years, getting to the final in three of the last four editions.

On Sunday, 15 August, Sundowns take on Chiefs at Lucas Moripe Stadium in what has been described as the big game of the weekend. Chiefs have had the opportunity to sign new players after serving a transfer ban and most of them are expected to make their official debuts for the club when they come up against Sundowns.

Another match that will be played on Sunday will be between AmaZulu and City at Moses Mabhida Stadium. AmaZulu finished second in the league last season and head coach Benni McCarthy is determined to win a trophy with them this season.

Sundowns, meanwhile, are more of a settled side, having won the last four league titles. The MTN8, however, has eluded them over the years and they will be hoping that they can finally get their hands on the title for the first time since 2007.