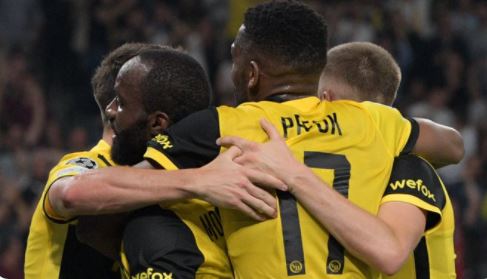 Cameroonian winger Moumi Ngamaleu scored for his side Young Boys of Berne as the player crafted the team's equalizer in their Champions League match against Manchester United on Tuesday night.

Both sides entered the game with top level confidence following their respective victories over the weekend in their domestic championships.

Cristiano Ronaldo open scoring for the visitors just 13 minutes into the game. The match seemed easy for the visitors until right back Aaron Wanbisaka was given a marching order 10 minutes to the break. That was the turning point of the game.

The Swiss boys came into the second half with redefined objectives as Manchester's attacking options were reduced. Sancho was pullout and replaced by Varane. Ngamaleu and Elia posed permanent threads to United's backline.

Both Africans combined to save a point of the day. Elia moved pass Shaw and played in a deflected cross that was met by Ngamaleu at close range, 66 minutes on the clock.

Ten man United managed the game without conceding till the last seconds of the 5 minutes of added time. Hearts broken as Lingard's back pass to De Gea was intercepted by Theoson Siebatcheu who scored the winning goal.

It is the player's first UEFA Champions League goal in his career in 6 matches played this far.

The Cameroonian International and former Coton Sport of Garoua winger has been enjoying the start of this football season. He scored Cameroon's lone goal against Ivory Coast two weeks back during their FIFA World Cup 2022 qualifiers.