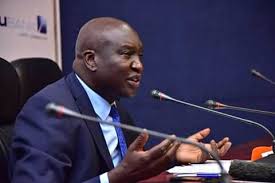 The chairman of Uganda Premier League side, Vipers SC, Dr. Lawrence Mulindwa has made it clear that they will do all it takes to bring a top class coach who will lead the club to greater heights.

“If it means breaking the bank to bring a top coach, we are very ready,” said Dr. Mulindwa during an interaction with the media at the St.Marys Stadium in Kitende on Monday.

Vipers SC’s head coach Fred Kajoba resigned on May 31st, 2021 for what he called misunderstanding between him and the technical director of the Club. Kajoba who served the Club for one year is also the goalkeeping coach for the national team, Uganda Cranes.

“How does Kajoba simply announce his resignation after a training session and even does not handover,” wondered the Vipers SC Chairman.

In a media briefing, Mulindwa assured that they are taking their time to get the right coach and that he will do whatever it takes to get one that ticks all the boxes.

“But, this time we are going to take our time to get an experienced and professional coach, one who will add value to football in Uganda, not just at Vipers and one that will help groom youngsters,” he explained the former Uganda FA President.

He made it clear that he needs to get a top coach who is ready to take the pressure and deliver the results. “ A coach who cannot take the pressure at a Club is not good enough,” added Mulindwa, also the the Federation of Uganda Football Associations (FUFA) Honorary President.

Speaking about the 2020/2021 Uganda Premier League where his team is placed third behind URA FC and leaders Express FC, Mulindwa made it clear that it would be wise for the League Committee to hand the trophy to the table leaders since one of the rules also suggests a team can win the League title if 75% of the matches have been played.

“We are not the ones who have brought COVID-19 which has now disorganized sports and football as well. Award the trophy and let teams start reorganizing for the new season,” added Mulindwa.

He made it clear that it will be very important for the authorities to declare the League champions now and which team will represent the country in the CAF Confederations Cup so that the teams can start preparing. “Playing on the continent needs good preparations and money,” he added.

Vipers SC, failed to go past the first hurdle of the CAF Champions League 2020/2021 when they got ejected by Sudan’s El merreikh. Last season Vipers SC were crowned Uganda Premier League (UPL) when the season was prematurely ended owing to Coronavirus (COVID-19) pandemic.