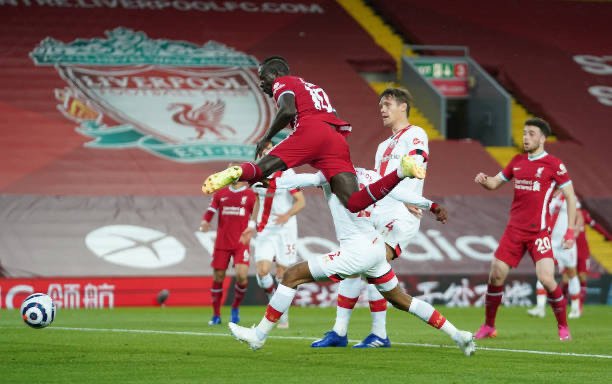 African players have been scoring and keep scoring as most European championships draw close. Congolese Mbokani, the Nigerian Osimhen, the Algerian Delort and the Senegalese duo Mané-Ndao made major headlines.

Liverpool are on a six-game unbeaten run (4 wins, 2 draws). The Reds' 2-0 win over Southampton at Anfield Road with Mane opening scoring was the ninth Premier League goal of the season for the Senegalese.

Morocco's Hakim Ziyech scored one of two goals for third-placed Chelsea in their 2-1 win at Manchester City. Ivorian Nicolas Pépé led the way for Arsenal's 3-1 win over West Bromwich Albion.

However, a goal from Nigeria's Kelkechi Iheanacho did not prevent fourth-placed Leicester from losing at home to Newcastle United (2-4).

Belgium (play-offs, day 2)
The Congolese striker Dieumerci Mbokani, who will be 36 in November, is not showing any signs of physical fatigue. The former TP Mazembe striker proved it once again by scoring twice (including a penalty) to help fourth-placed Royal Antwerp to a 2-2 draw at Anderlecht, one of his former clubs.

France (round 36): Coulibaly and Louza lead Nantes
At the top of the table, as well as at the bottom, the last two rounds will be decisive for the allocation of good (and not so good) places. Matchday 36, while it brought Lille closer to the title of French champion, did not seal any fate. But it was mainly in matches involving teams struggling to stay in Ligue 1 that African players were able to shine.

The Algerian Andy Delort, for example, scored one of Montpellier's three goals in the eighth minute at Strasbourg (16th), where the Ivorian Kevin Zohi reduced the deficit too late (2-3).

Nantes (18th) dominated Bordeaux (3-0) thanks to Malian Kalifa Coulibaly and Moroccan Imran Louza (penalty). Brest (14th) lost (2-3) at Nice (9th) despite a double from Beninese Steve Mounié. The Algerian Hicham Boudaoui scored his third goal of the season for Les Aiglons. Nimes (19th) won 3-0 at Metz with a penalty from Algerian Zinedine Ferhat.

Italy (round 35): Osimhen in form
Napoli took advantage of their 4-1 win at La Spezia and the collapse of Juventus, who were humiliated at home by AC Milan (0-3), to move up to fourth place, which qualifies for the Champions League.

The Nigerian Victor Osimhen, who has been very effective in recent weeks, scored two of Napoli's four goals. Sampdoria, in ninth place, lost heavily (1-5) in Milan to Inter, who were recently assured of the national title. The Senegalese Keita Baldé saved Samp's honour.

Turkey (round 38): Boupendza again decisive, Ndao on fire
Hatayspor are likely to qualify for a European competition for the first time in their history. A 1-0 win over Denizlispor, courtesy of a goal from Gabonese Aaron Boupendza, took them a step closer to that goal.

Trabzonspor (4th) beat Antalyaspor 2-1, with a goal from Nigeria's Anthony Nwakaeme. Senegal's Alassane Ndao scored twice in Fatik Karagumruk's 5-1 win over Genglerbirligi, while the latter's goal was the only one of his kind. Yeni Malatyaspor (14th) were 4-0 winners at Rizespor, with goals from Zimbabwean Teenage Hadebe and Ivorian Moryke Fofana.

And elsewhere...
Togo's Ilhas Bebou scored one of four goals for Hoffenheim in their 4-2 win over Schalke in the 32nd round of the German league.

In Austria (29th round), Cheikhou Dieng scored an injury-time winner for fifth-placed Wolfsberger in a 2-1 win over Rapid Vienna.

In the Swiss league (round 33), Ibrahima Ndiaye, another Senegalese, scored in a 3-0 win over Servette Genève for FC Lucerne (4th).

In the Netherlands (round 32), a goal from Nigerian Bobby Adekanye gave 18th-placed ADO The Hague a 1-0 win over PEC Zwolle and kept their hopes of staying in the Eredivisie alive.

In the 32nd round of the Albanian league, sixth-placed Kukesi beat Vllaznia Skhoder 3-1 with a goal from Nigerian Patrick Eze. Skenderbeu (8th) were held to a 1-1 draw by Partizan Tirana, despite the efficiency of Ghanaian Alfred Mensah.

In Belarus, Senegal's Ablaye Mbengue scored in a 3-1 win for third-placed Dinamo Minsk at Isloch.

In Serbia, Red Star Belgrade, already assured of the league title, beat Zlatibor 6-1, with a goal from Gabonese Guélor Kanga. Novi Pazar (15th), clearly dominated Mladost Lucani (4-1), a game that allowed the Guinean Abdoulaye Cissé to score his fourth goal of the season.

In Scandinavia, the Africans also made their presence felt. In Finland, seventh-placed Honka beat FC KTP 3-1, with a goal from Gambian Demba Savage. The leader, FC Mariehamn, got rid of Oulu (3-1), with goals from Ivorian Mohamed Olawale and Ghanaian Mohammed Abubakar.