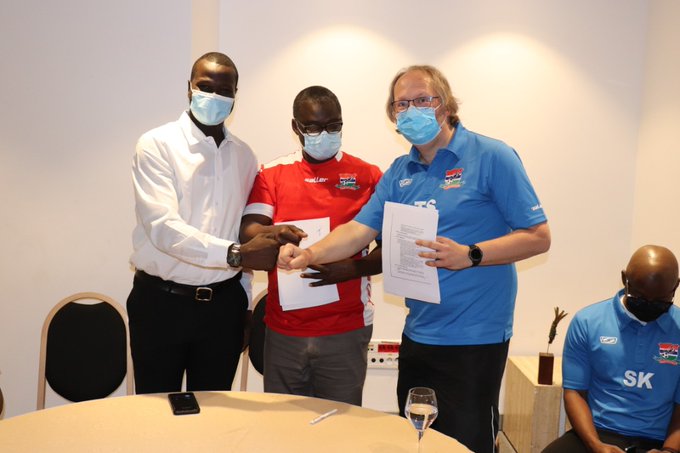 The Gambia last Thursday secured qualification ticket for the AFCON 2021 in Cameroon with a win over Angola and the head coach Tom Saintfiet who has been with the team since 2018 has been hugely rewarded with a five-years contract extension deal on Monday.

This means that the Belgian coach will enjoy the fruits of his own labor as he will pilot the Gambia to a rare but deserved participation at the final stage of the AFCON come 2022.

This news was announced by the President of the GFF, Mr. Lamin Kaba Bajo at a signing ceremony held at the Scorpions Team Hotel in Kinshasa Monday morning. The signing was held between the Federation and the Belgian, who turned 48 today, after which Tom described himself as the ‘Smiling Coach of The Gambia’. 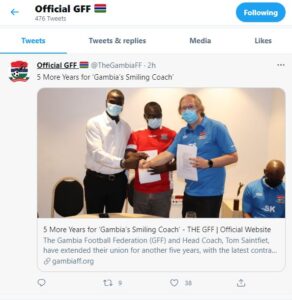 An over 70 years wait is over for the nation as they will be participating for the first time in this competition.

A marvelous story as the team that was considered underdogs, punching in same category with Angola, Gabon and DR Congo, managed to secure qualification ticket with one game to spare.

The Gambia finished joined group D leaders with Gabon, recording 3 wins, 1 defeat and a draw in 5 qualifier games. Both Gabon and Gambia finished top of the log with 10 points ahead of DR Congo with 6 points and Angola with just 1 point.

At the beginning of the qualifiers, qualification was a prerequisite for head coach Thom Saintfiet and the Gambian Federation as expressed by the Federation President Mr. Lamin Kaba Bajo who affirmed it was just the right time to re-entrust confidence with the Belgian coach.

“He has proven his worth and the whole football family is satisfied with him. This new contract will avail us the opportunity for continuity, and he will lead us to the 2022 AFCON Finals, the 2023 and 2025 editions as well as the 2026 World Cup qualifiers,” Mr. Bajo affirmed.

The Gambia is in the DR Congo to play their last qualifying game against a side that has nothing to gain except for pride at home as the DR Congo will not qualify even with a win that will leave them on 9 points.