Gernot Rohr: "I would like to have Eze with Nigeria'' 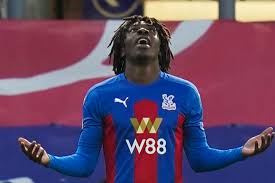 Gernot Rohr: "I would like to have Eze with Nigeria''

Eberechi Eze is taking his time over the next stage of his international career. The Crystal Palace player has been torn between England and Nigeria and recently received a text from coach Gernot Rohr. But he is still asking for time before making a decision.

Nigeria is not letting go of Eberechi Eze. And it's Super Eagles coach Gernot Rohr who is unleashing that passion again. The coach praised the qualities of the Crystal Palace player. He hopes that the former QPR player will end up choosing Nigeria rather than England for the rest of his international career.

Eze (22) was born in England and is currently under tremendous pressure. "Ebere Eze is one of the best attacking midfielders I have seen in England. And I would like to have him with us," Rohr told Elegbete TV. However, the coach knows it will be difficult for him to realize such a dream by the next Africa Cup of Nations. "You know he can also play for England and has already played for a young team with England," the former Gabon coach tempered.

"There is a process to get Eze"

The task of landing the nugget will be an arduous one. And the federations have already learned this the hard way. For since 2019, Nigerian officials have been chasing the issue. "There is a process to be done, in the first instance, the boy must accept himself. And the decision has to come from him, from his parents, from his own people," Rohr noted. "We can't tell him that he has to come, he has to come himself. And if he wants to come, he has to write a letter to FIFA saying he wants to change (his sporting nationality) and play for Nigeria. That would be wonderful, but I know we cannot force his decision and he can only make it himself," the former Bordeaux coach continued.

Eze has been on Nigeria's radar for some years. He also met with Nigeria Football Federation (NFF) president Amaju Pinnick in 2019 about a possible change in sporting nationality. But so far, the England youth international is yet to decide on the next step in his international career.

Eze has always asked for time to make his decision. And Rohr said the youngster's position has not changed after sending him a message. "I sent him a message. In that message, I showed Nigeria's interest in bringing him into this team. He replied, and told me that he has to think about it, so this is not the time to talk too much about it," the German tactician concluded.