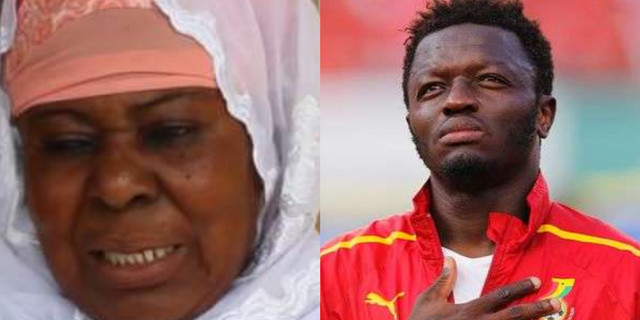 Hajia Kande, the mother of former Ghanaian International, Sulley Muntari, has passed away.

According to reports, the player’s mother passed away on Sunday, 30th May 2021 after a short illness.
She was also the mother of former Asante Kotoko midfielder Muniru Sulley who now plays for Belarusian side Minsk.

Hajia Kande will be buried today, Monday, 31st May 2021 at Koforidua Tafo

Prior to her burial, Ghana's Chief Imam Sheikh Osman Nuhu Sharubutu will pray over the late mother of former Ghana international player Sulley Ali Muntari. The Janazah (funeral) prayers will be observed at the residence of the former Inter Milan and AC Milan star.

It can be recalled that in 2009, Hajia Kande made the headlines after she made claims that the Black Stars will not flourish without her son.

The mother of the former international player launched an attack on the media and a section of the public for criticizing her son.

Her popular comment, ‘No Sulley, No Blackstars’ made waves as she threatened not to allow her son to feature for the national team any longer.

Following the news of her death, some Ghanaian celebrities have taken to social media to express their condolences.

The Professional Footballers Association of Ghana (PFAG) also extended its support for Muntari and his family.
Four years ago, in the same month of May, the Muntari brothers lost their dad Alhaji Sulley Muniru after he battled with illness.

"The @PFAGofficial is saddened to hear of the passing of the mother of Sulley Muntari. We hold you close in our thoughts and hope you know you can lean on us for whatever you may need. Sincere condolences"-  the Association tweeted.

He passed on at the 37 military hospital on Monday after he was rushed there following excessive pain.

Alhaji Muniru previously coached the Nigerian side Kano Pillars in Northern Nigerian where Muntari was born.

He was also the former El-Kanemi Warriors coach.