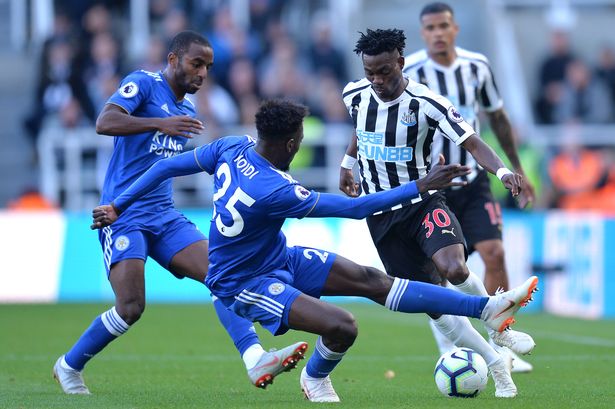 Leicester City's Friday night home game against Newcastle United was an opportunity for the Foxes to consolidate 3rd spot on the log and distant themselves from Chelsea in 4th.

High flying Iheanacho was paired up front with Jamie Vardy, perfect conditions for a home win against their mid table visitors.

The conditions on paper could not be replicated on ground as Newcastle beat Leicester 4-2 at the King Power Stadium. The defeat has just narrowed their chances of playing the Champions League next season.

Kelechi Iheanacho's side are now third in the league and only two points ahead of Chelsea. The Blues could even move ahead of them if they beat league leaders Manchester City on Saturday 8 May.

The visitors took a 2-0 lead into the break as their star man Saint Maxima's pace was unmatched by Leicester's defense line. The Frenchman was hugely implicated in the victory while Joe Willock  22'' and Paul Dummet 34'' scored the first half goals.

Upon resumption, the revived visitors who had as plan to distance themselves farther from the relegation song scored two more goals with 10 minutes to full time. Callum Wilson got his brace and put the visitors 4-0.

Two late efforts from Albrighton 80'' and Iheanacho 87'' reduced the damage for Leicester.

The Magpies, meanwhile, have moved off the bottom of the table with this latest victory. They are now 13th, 12 points behind the relegation zone.

The Nigerian international Iheanacho has been in fine form, scoring again in the league. He now has 11 goals and two assists to his name.