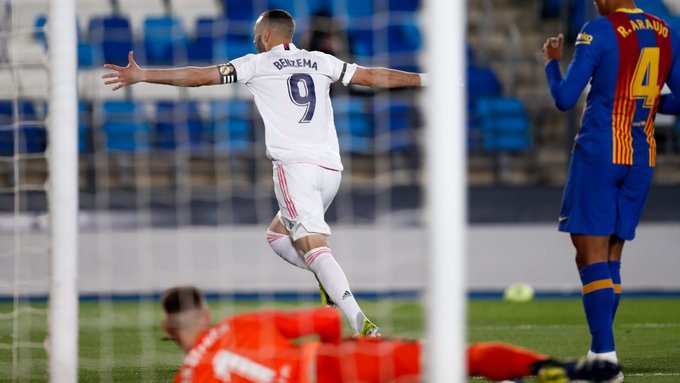 Real Madrid's 2-1 win over Barca in the Clasico on Saturday has put them in the driving seat in La Liga.

A hugely anticipated game between two of the leading scorers in the land, Karim Benzema and Leo Messi captained both Real Madrid and FC Barcelona at the Alfonso di Stefano. Prior to kickoff, the visitors were second on the log with 65 points, two more than their host Madrid on 63.

The game started on a very high gear as both sides were eager to draw first blood. Real Madrid already showed early signs of dominance in the midfield. A collective action led by Valverde from the midfield invited a well timed low right cross from Vasquez to pick out on rushing Benzema (13th) who beat the Barca keeper from a tight angle in the near post. It was indeed a stylish finish from a man basking in surplus confidence.

Toni Kroos (28th) gave Real the lead at the break with a slightly deflected freekick. Barca were to reduce the lead through Oscar Mingueza (60'). But the Merengues held on for a 2-1 win.

Casemiro was sent off for picking two yellows while the woodwork saved both sides twice in the encounter that was made even more difficult by windy rains in Madrid.

However, the Merengues could leave the top spot if Atletico get a positive result against Betis Sevilla on Sunday.

A rare feat for Zidane's team as Real Madrid beats Barcelona both home and away this season.