Manchester City has qualified for the semi finals of the most prestigious FA cup on Saturday night after seeing off Everton 2-0.

The game was tied at goalless until half time.

Second half saw the introduction of Kevin De Bruyne and with less than 5 minutes to full time, German midfielder IIkay Gundogan who is enjoying the form of his Manchester City career finished off a rebound with a diving header to put the visitors ahead. 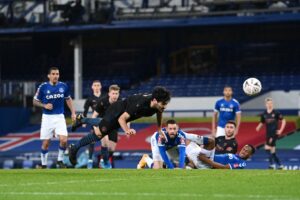 Substitute De Bruyne completed the goal scoring at the 90th minute to send the sky blues into the last four of the competition.

Earlier in the day Southampton demolished Bournemouth 3-0 with a goal from Moussa Djenepo and a brace from Nathan Richmond to send the Saints into the semi finals of this year's FA Cup.

The other two quarter final matches will be played on Sunday March 21, 2021 as inform Chelsea takes on Sheffield United while it will be another highly rated Premier League top table clash between Leicester City and Manchester United.

Pep Guardiola and Manchester City are on an upward spiral towards another memorable season as they have kept a 14 point lead over runner up Manchester United in the Premier League log with less than ten games to the end of the season.

In the Champions League Manchester City has been paired with Borussia Dortmund in the quarter finals.

On Sunday April 25,2021, the team will play against Tottenham in the finals of this year's Carabao Cup.

With their FA Cup semis ticket, Pep Guardiola and Manchester City will have their barrels pointing at four different channels but arguable their top priority will be winning the UEFA Champions League for the very first time in their long history.