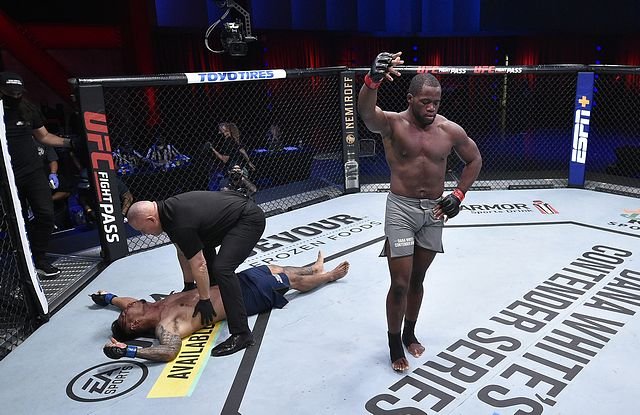 Tafon Nchukwi is increasingly asserting himself in the prestigious Mixed Martial Arts League (MMA), after a successful debut in the Ultimate Fighting Championship (UFC). Author of 5 fights in as many victories, the 26 year old Cameroonian is expected to debut on May 8 against the South Korean Jun Yong Park.

Tafon Nchukwi (26 years old, 1m83) is not yet as good as Francis Ngannou, the current world champion. But he is making his way to the top of Mixed Martial Arts (MMA). Like any beginner in a discipline, he learns, observes, and seeks to progress.

Tafon Chukwi has made perseverance his leitmotiv. Because, from his debut in the octagon, the Cameroonian has asserted himself as a future lord of the discipline. The Indomitable Lion won his first fight against Jamie Pickett. He dominated his opponent by unanimous decision of the judges (30-25, 30-26, 30-26). This was on 19 December 2020.

The Bamenda native (North West of Cameroon), spotted by the Ultimate Fighting Championship (UFC) during the Dana White's Contender Series (a detection tournament), is currently undefeated in five professional fights.

His devastating kick that knocked out the American Matavao opened the doors to the prestigious MMA League. Dana White, the president of the Ultimate Fighting Championship (UFC), remains impressed by the talent of the Cameroonian who reminds him of a certain "Mike Tyson", the boxer.

At 26 years old, he is now among the elite of Mixed Martial Arts in the middleweight category where he has already fought 4 times. A rapid rise that the Cameroonian explains in part by his victory over the promising American William Knight, in November 2019.

This is one light heavyweight you DON’T want to miss.

In the footsteps of Francis Ngannou

Tafon Nchukwi is still far from the level of his compatriot Francis Ngannou, the current world champion. However, considering his performances for a rookie, there is reason to hope for Tafon Nchukwi and see another African at the top of the discipline.

His next test on 8 May against Jun Yong Park (30) will be decisive. The native of Bamenda will have to beat the South Korean. The latter has a record of 12 wins and 4 losses. Quite a challenge to take up...