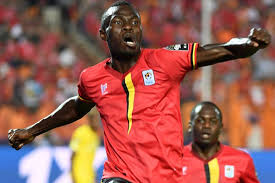 Egypt based professional Emmanuel Arnold Okwi has been selected to skipper the Uganda Cranes on June 10th when they face South Africa in an International friendly.

Okwi, one of the Uganda Cranes long serving players takes over the captain’s role from goalkeeper Dennis Onyango who retired in March 2021 after the team failed to qualify for the 2021 Total Africa Cup of Nations (AFCON).

The Uganda Cranes Acting coach Abdallah Mubiru named the striker as the skipper while releasing a 34-man squad on Wednesday at the Federation of Uganda Football Associations (FUFA) headquarters in Mengo.

Okwi who made his first appearance for the Uganda Cranes in 2011 currently features for Egyptian Premier League side Al Ittihad Alexandria Club.

The two teams that failed to qualify for the 2021 AFCON will use the friendly match to prepare ahead of the 2022 FIFA World Cup Qatar qualifiers which will start in September.

Initially the qualifiers were meant to be played next month, but the Confederation of African Football (CAF) and FIFA postponed to September.

“I am happy that the team will have an international friendly and some new players will also have chance to feature,” said Acting coach Mubiru.

Another Egyptian based midfielder Khalid Aucho who was suspended by FUFA ahead of the national team’s two crucial matches in the 2021 AFCON because of indiscipline was not invited.

Goalkeeper Ismael Watenga who recently joined South African side Chippa United FC has also been invited together with Erick Kambale who has been in good form for Uganda Premier League table leaders Express FC.