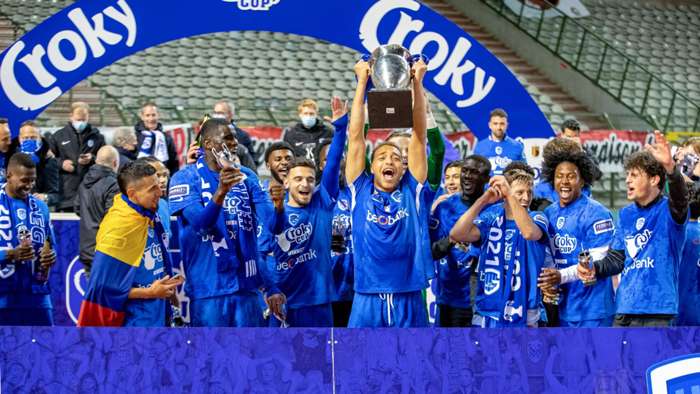 Nigeria international Paul Onuachu was at his best as he provided an assist in Genk's triumph in the Belgian Cup on Sunday following a 2-1 victory over Standard Liege.

Heading into the final, the Nigeria international has scored twice in two appearances for the Smurfs in the competition this season as his side were aiming to reclaim the Belgian Cup for the first time since 2012/2013 season.

Junya Ito break the deadlock for the Smurfs when he opened the scoring in Brussels, three minutes into the second half and Onachu assisted teammate Theo Bongonda to double the lead in the 80th minute.

However, DR Congo forward Jackson Muleka struck in the 84th minute to grab a consolation for Standard Liege as the 10-man side could not avoid defeat after the sending off of Mali defender Moussa Sissako.

Onuachu featured from the start to finish and has now taken his tally to 31 goals and four assists in all competitions for Genk this season. Earlier, the 26-year-old ended the regular First Division A campaign with 29 goals in 33 matches as van den Brom's side finished fourth in the league table thereby qualifying for the play-offs.

However, his compatriot Cyril Dessers was an unused substitute as they both lifted their maiden title in Belgium.

Besides reclaiming the title, Genk have also secured an automatic qualification for next season’ Uefa Europa League play-off round, and it was the club's first honour since the won the Belgian top-flight title and Super Cup in 2019.

After their latest feat, the Nigerian duo of Onuachu and Dessers will shift their attention to the play-offs where they will battle Royal Antwerp on Friday with a place in the Uefa Champions League also up for grabs.

The Smurfs are fourth in the play-off table with 28 points after overall points during the regular season were halved. They will also battle Anderlecht and Club Brugge - who sit at the top with 38 points.