Riyad Mahrez: Reflects on football and it's past glories 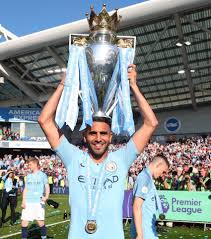 Riyad Mahrez reflects on football and it's past glories

Riyad Mahrez says he feels good at Manchester City. The Algerian has been winning at least a title in his football career ever since his 2016 exploits with Leicester City. He later made a big deal move to Manchester City where he has been on an upward spiral towards glory in the English Premier League.

Mahrez is one of the keen followers of the just ended European Championship as he spent time at home in Algeria on holidays.

In an interview with the YouTube channel Oui Hustle, Riyad Mahrez talked about the failure of the French team at Euro 2020. An eye catching point of the competition according Mahrez was the viral reactions that followed the  missed penalty of Kylian Mbappé.

The Algerian winger believes that this failure must serve him to better rebound. "Football is a perpetual questioning. We saw it with Kylian Mbappé.''

'' He won the World Cup three years ago. There, he missed the penalty. Everyone came down on him. Everything you did yesterday, they don't care, it's the past. You forget about it. So you have to look ahead. When you win, next year you have to come back and try to win again. That's the right mentality. And those who have it succeed a lot," said the Manchester City player.

Every defeat in football is a lesson learned and Mahrez knows that best.

His Manchester City side enjoyed a series of successes last season winning the league title and the Carabao cup. Their most wished for trophy, the Champions League was missed following Chelsea's 1-0 win over Manchester City at the finals in May 2021.

Manchester City and Mahrez played the finals of the Champions league for the first time in the club's history but were crushed at the end. Mahrez still vividly feels the pinch but the player looks set for a fresh challenge as the pre- season draws near.