South Africa: Who will be the Premier Soccer League's 'Best Player'? 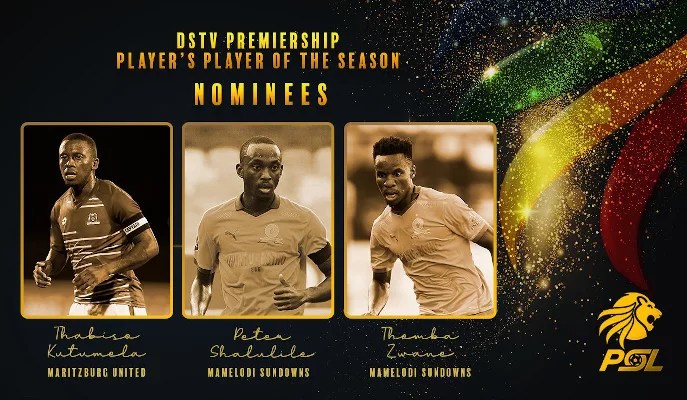 South Africa: Who will be the Premier Soccer League's 'Best Player'?

The South African Premier Soccer League has announced the names of the three footballers competing for the title of "Best Player" of the season. The three finalists for the 'Coach of the Year', 'Prospect of the Year' and 'Goalkeeper of the Season' have also been announced.

The Premier Soccer League has announced the list of nominees for the 'Best Player' award of the season. And three winners are all in with a chance of winning the highest award for a footballer in South Africa. Thabiso Kutumela (Maritzburg United), Peter Shalulile (Mamelodi Sundowns) and Themba Zwane (Mamelodi Sundowns) are the three finalists for the DStv Premiership Player's Player of the Season.

Striker Thabiso Kutumela (27) has scored 12 goals in 26 games. While Namibian forward Peter Shalulile (28) is also on fire. With 11 goals in 22 games, he has been one of Mamelodi's chief scorers.

Themba Zwane (31), also a striker, is the most experienced of the trio. The Mamelodi Sundowns man has also scored 11 goals like his club partner, but with more games (28). The trio is indeed subject to the coaches' votes.

Benni McCarthy, Coach of the Year?

In the category of 'Best Coach' of the year, Benni McCarthy is in a good position. The AmaZulu coach is competing with Golden Arrows coach Mandla Ncikazi and the Mamelodi Sundowns duo of Manqoba Mngqithi and Rulani Mokwena. The former Bafana Bafana star, however, starts with the favorites. Benni McCarthy had managed to go 16 games without defeat.

Footballer of the Season

Coach of the season

Young Player of the Season (Under 21)

Goalkeeper of the season