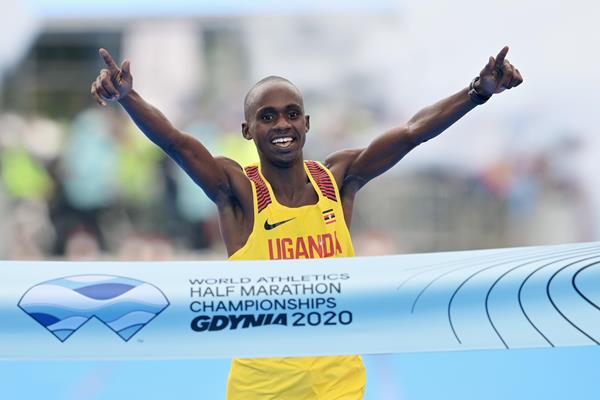 World Half Marathon champion Jacob Kiplimo on Wednesday night qualified for the Tokyo Olympics after winning the 10,000m race at the 60th Golden Sike Meeting in the Czech Republic.

The 20-year old Kiplimo became the 25th athlete from Uganda to qualify for the Tokyo Olympics slated for 23 July to 8 August 2021 in Tokyo, Japan.

“We are very happy that Kiplimo has hit the mark to qualify for the Olympics. This is very good news because we shall have a very strong team in Tokyo,” Dominic Otuchet, President of the Uganda Athletics Federation (UAF) told Sport News Africa on Thursday.

The win in Ostrava puts Kiplimo in the 7th position of the fastest athletes in the 10,000m race. However, this also makes him the third Ugandan to win the race after Boniface Kiprop who won the race with a personal Best of 26:39.77 in Brussels in 2005.

Uganda’s team to the Tokyo Olympics will be led by 10,000m and 5,000m champion Joshua Cheptegei and 2012 London Olympics gold medalist Stephen Kiprotich.

Besides athletes track and field events, Uganda has also qualified athletes in Rowing, Swimming and Boxing for the Tokyo Olympics. More Ugandan athletes in Weightlifting are also expected to qualify before closure of the qualifying period.