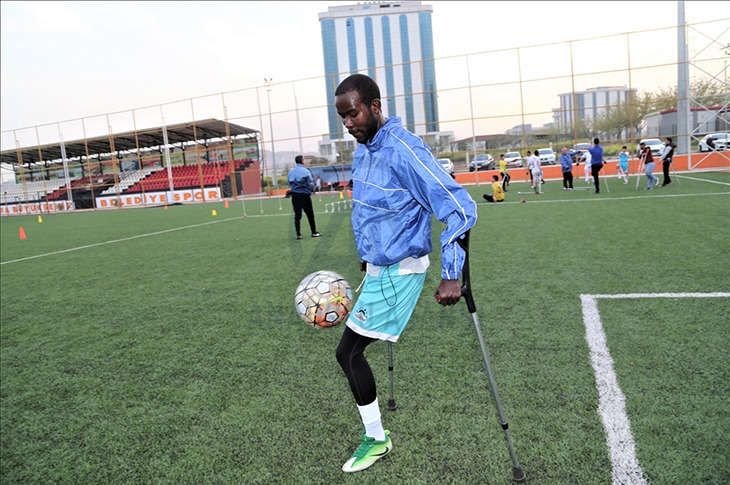 Brian Oroko Ochieng, 29, has realized his dream. The one-legged Kenyan international has just signed a professional contract in the renowned Turkish top flight.

Brian Oroka Ochien's story will be written in Turkey. The one-legged Kenyan international has signed up with Şanlıurfa, a Turkish first division amputee football club. He joins a tough league in the country that was crowned world champion of this football in 2017.

This is Brian Oroko Ochien's first pro contract. Passionate about football, this former student of an aeronautical engineering school finally made a radical decision: "I decided to stop everything to concentrate on sport and live this adventure in Turkey."

Ochien says he is happy with his life in Turkey, although he admits he has room to grow in the new culture. "I have already started to attend classes at a public education center. I am regularly learning the Turkish language," he smiles proudly. I have made great progress thanks to my teacher and I already know a few words."

Although he has moved thousands of miles away, Brian Oroko Ochien remains attached to his native Kenya. He wants to continue to wear his national team jersey to defend his country's colors and share his experience with other Kenyan internationals.

Amputee football was officially launched in 1980. The rules are the same as those for regular football, with a few differences: only the good leg must be in voluntary contact with the ball, either to move it or to control it.

The crutch is considered a hand. Voluntary contact with the ball is sanctioned. In amputee football there is no such thing as offside. Goalkeepers are obliged to stay in their own area. If they leave the area, they are penalized with a penalty. Hitting the opponent with a stick is punished with a red card and a penalty.