UEFA CL: Mahrez and City get vital away win in Paris 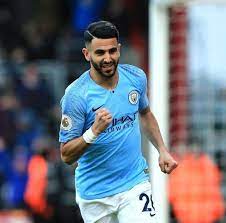 Manchester City takes a step into the finals of the Champions League with a vital 2-1 away win in Paris on Wednesday night.

A full strength Parisian side looked poised to take advantage of home soil but the visitors had other plans.

Pep Guardiola surprised his opponents when the starting line ups were made available. No Gabriel Jesus, no Sterling, no Aguerro up front for City who opted for Mahrez, Bernado Silva and Phil Foden to lead the attack.

The Parisians opened the scoring in the 15th minute. Marquinhos beat Ederson to a Di Maria corner with a downward header. Manchester City had difficulties creating goal scoring chances though they had a majority of the possession. The two teams returned to the locker room with a score of 1-0.

In the second half, the Citizens put their feet on the gas, created more chances and equalized through Kevin De Bruyne (64th). The Belgian curled his cross-shot pass Navas, who misjudged the trajectory of the ball.

Riyad Mahrez's 71st minute free-kick gave Manchester City the lead and a good chance to go through to the next round. PSG will have to win by two goals on Tuesday to confirm their place in the final. Mbappe was given a number 9 role in which he was eclipsed by Stones and Dias for City. The pacy winger was hardly noticed in his new role.

Idrissa Gana Guèye took an early bath and will miss the return leg in Manchester.

On Tuesday, Real Madrid were held 1-1 by Chelsea. The two teams meet again next Wednesday.

Except otherwise, we could be looking at two English clubs in this year's finals as Chelsea and Manchester City are on course to making it to the finals.