The Indomitable Lionesses of Cameroon are close to qualifying for the next Olympic Games. Chile represents a huge blockage to effectuating this dream. Cameroon must see off Chile in Turkey in the play-offs (10 and 13 April) to participate in the women's football tournament when the Olympic games finally come up.

The Indomitable Lionesses have arrived in Turkey. The Cameroonians are preparing for their double playoff against Chile. These two matches are part of the women's qualifying tournament for the next Olympic Games Tokyo 2020. In Antalya, the Indomitable Lionesses will acclimatize for three days before facing the Chileans. The first leg is scheduled for April 10 and the return leg will take place on April 13.

Before flying to Turkey, the Cameroonians have conducted a training course in Yaounde, punctuated by 4 friendly matches. "The technical staff of the Lionesses has focused its work on athletic quality, tactics, technique and mental," according to the website of the Cameroon Football Federation (FECAFOOT). "At the end of the training camp, the coach Alain Djeumfa published a list of 25 players to face Chile. Among the 25 selected, 15 play in the Guinness Super League and 10 play abroad," adds the same source.

Coach Alain Djeumfa is confident and optimistic in view of the work done and the means deployed by the State and FECAFOOT. Cameroon knows well the path of major competitions. Even if Chile also has experience in women's football, the Indomitable Lionesses seem to have all what is needed to succeed in this mission. 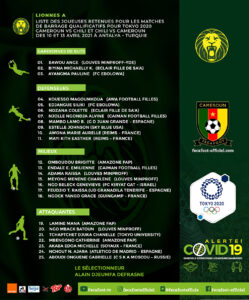