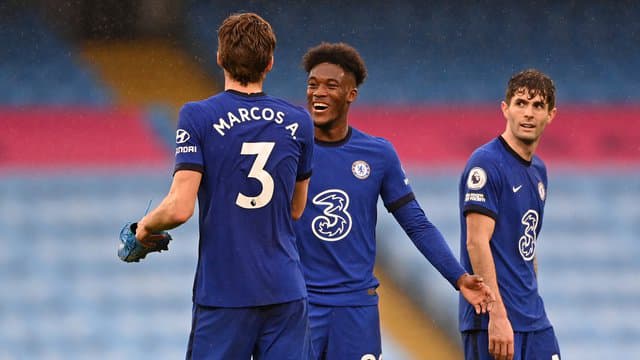 Manchester City's title coronation has been delayed following their home defeat earlier Saturday evening at the Etihad stadium. A victory for City could have crowned them champions with 3 matches to the end of the season.

A 2-1 loss was not the issue for Pep Guardiola's team, but their conquerors being Chelsea FC makes the defeat even more painful.

After their eminent qualification to the Champions League finals last week, Manchester City's attention was now set on winning the domestic league. A full attacking option with both Gabriel Jesus and Kun Aguerro lined up for City as Rahim Sterling was also given a starting role. Chelsea had eliminated Manchester City a fortnight ago in the semi finals of the FA Cup, preventing them from gunning a Quadruple this season. Saturday's game was also a preview of this season's Champions League finals. Playing at the Etihad meant home advantage for the Sky Blues who open scoring 44 minutes into the first half. Aguerro equally failed to convert from 12 yards as Mendy's vigilance paid off with a save, preventing City from taking a 2-0 lead into the break.

Chelsea came in powerfully in the second half and Hakeem Ziyech combined with Azpilicuerta to craft an equalizer at the 63rd minute. Chelsea took over command of the game as City cried unsuccessfully for penalty calls when Zouma went harsh on Sterling in the danger zone.

The game looked set for the spoils to be shared until Marcos Alonzo finished off a low right cross from James at the 92nd minute to steal all 3 points for Chelsea.

The victory sends Chelsea into 3rd place as they frog-leap Leicester City who lost at home on Friday night 4-2 to Newcastle United.

The victory also puts Chelsea on a mental advantage over Manchester City ahead of the Champions League finals two weeks from now.

Manchester City can count on Aston Villa to win against Manchester United on Sunday afternoon if they have to be crown champions of England.