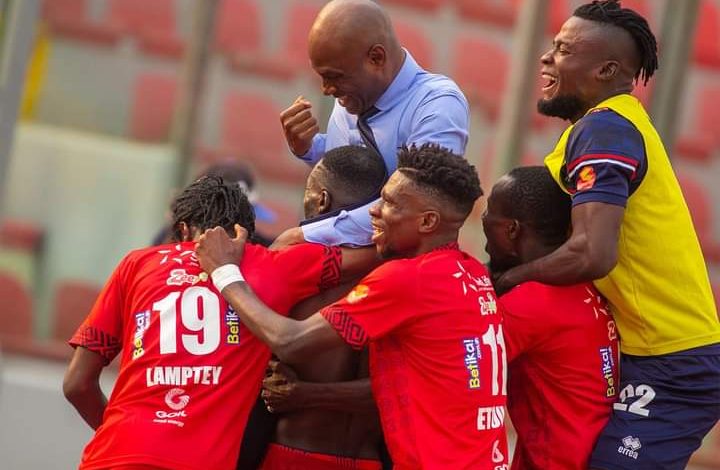 Match day  20 of the 2021/2022 Ghana premier league has ended with Asante Kotoko recording the biggest victory of the week over newbies, Bibiani GoldStars at the Baba Yara Sports stadium whiles rivals Accra Hearts of Oak fell to a slim 1:0 defeat to Aduana Stars in Dormaa.

Accra Great Olympics continues to overshadow the Accra based clubs as they recorded a 1:0 victory over Legon cities.

AshantiGold continues their winning run with a 2:0 victory over Alhaji King Faisal at the Len Clay sports stadium on Friday. Goals from Kamaradini and Opoku Agyemang ensured that the Kumasi based club leaves Obuasi with another defeat.

King Faisal have registered only 6 points in their last 8 games in the league.

Newbies Accra Lions pulled a surprise at the Accra Sports stadium as they defeated Dreams FC by a lone goal courtesy Fawzan Dandawa.

Fawzan finished off a beautiful cross from Abass Samari in the 94th minute to hand the home side a very important victory.

Berekum Chelsea hands Karela United a painful 1:0 defeat at the Berekum Golden city park. Emmanuel Sarpong shot the Bibires ahead in the 50th minute of the game and the Berekum based club ensured that the maximum points stayed at home.

Accra Hearts of Oak of continues their poor run in the 2021/2022 Ghana premier league as they lost narrowly to Aduana Stars at the NAB park in Dormaa on Sunday Afternoon.

Sam Adams's strike was enough to sink the Phobians as their search for a victory in the past five (5) away league games continues.

Coach Annor Walker's side continues their sweet run in the Ghana Premier league, defeating Legon Cities by a lone goal at home.

Samuel Ashie Quaye's strike was enough to save the day for the Rosalinda lads.

The Dade boys are yet to taste a defeat in their last five league games, having won four and drawn one.

The Burkinabe broke the deadlock of the game in the 66th minute from a header to hand the yellow and mauve club all points at the Akoon community park in Tarkwa.

Bechem United saw off Elmina Sharks in a 5goal thriller at the Nduom sports complex on Sunday Afternoon.

Youngster Emmanuel Annor shot the visitors ahead in the 19th minute with Augustine Okrah doubling the lead in the 26th minute.

Tahir Mensah pulled one back for the Sharks in the 36th minute, reducing the deficit to one before the end of the first half.

Tahir Mensah restored parity in the 78th minute of the game but the home side couldn't hold it but to concede on the dying seconds of the game as Emmanuel Owusu rose to restore the lead for the hunters in the 94th minute.

The Porcupine warriors demolished Bibiani Goldstars on Sunday night in a 5:0 victory.

Cameroonian George Mfege bagged a brace in the first half with Frank Mbella , Augustine Agyapong and Samuel Boateng scoring each to make sure Asante Kotoko extends the lead at the top of the league table.

Below is the league table: