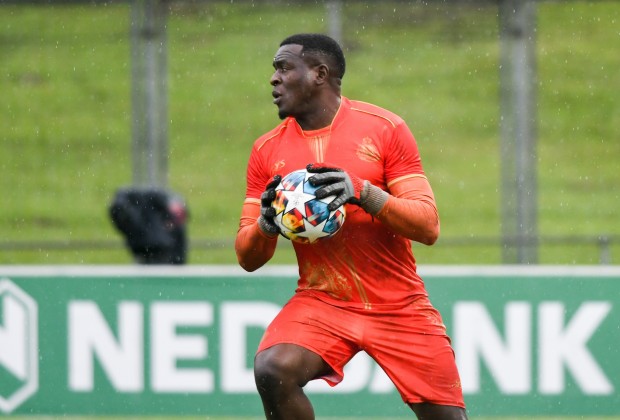 Very few foreign goal keepers thrive in the South African Premier Soccer League. The championship and the Rainbow nation is blessed with some home grown talents between the sticks. Making first team choice as a foreign keeper is not very evident with most clubs. A total of 574 players are registered for the DSTV Premier Soccer League this season with 94 being foreigners. It will mostly take a Dennis Onyango or a Kenedy Muene as foreigners to be a regular starter especially for the top clubs but there is one man who is breaking the goalkeeping ice as a foreigner in South Africa.

Royal AM is currently second on the log behind Mamelodi Sundowns. The team from Durban is playing the top tier for the second season and are already making headlines, sidelining the usual big clubs like Amazulu, Chiefs, Pirates and Super Sports FC.

The club's success can be tied to their 35 year old Cameroonian keeper Patrick Hugo Nyame who has been prolific between the sticks. Born in April 1986, the 1.83 meters tall keeper has played 23 games keeping 9 clean sheets in arguably the most competitive local championship on the continent. Nyame has a 96 per cent starting eleven chances and his play percentage is at 96. 50 per cent penalty save ration this season.

Meet Cameroon’s 35 year old Keeper Hugo Nyame who is getting finer with age. He plays for Royal AM in the DSTV PSL in South Africa. pic.twitter.com/fYE3cPPQOK

Nyame's consistency has propelled the club to 43 points on second spot with 24 matches played. The Cameroonian has only missed a single league game this season for his employers.

In a conversation with sportnewsafrica, the former Cameroonian international says he is at his best and still has dreams of playing with the Indomitable Lions.

'' I can say that I am getting finer with time and the South African experience has brought a lot of developments to my game. The level of professionalism here is second to none and the competitions here are very intense. I think I can still serve my nation and my form and statistics are my leverage''.

Hugo Nyame is clearly in the run for the best keeper this season in South Africa. In the last 5 games for Royal AM, the team has won 4 and played a draw. With 8 games to go, Royal AM and Nyame know that the final sprint comes with more challenges but the Durban side can cling onto a second spot at the end of the season. That feat will eventually translate to a spot in next season's CAF competitions and the Cameroonian keeper is keen on this.

'' As a team we will want to finish the season on a high, meaning keep the second spot and do better if possible, but we also have our eyes on the CAF competitions. I think we have a squad that can do way better in the continental competitions but for now we have to stay focused on achieving the goal '' concludes Nyame.