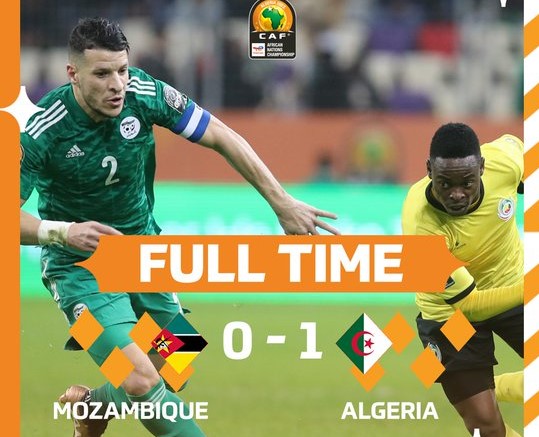 Mozambique accompanies Algeria, host country of the CHAN 2022, into the quarterfinals, despite a defeat (1-0) against the local Fennecs on Saturday, January 21. Madjid Bougherra's men are doing a great job and finish first in group A.

Host country of CHAN 2022, Algeria gets three out of three for the group stage. After winning their first two games in Group A (1-0 against Libya, same score against Ethiopia), the local Fennecs have won a third game against Mozambique this Saturday, January 21.

The men of Madjid Bougherra applied their home rate (1-0) to the local Mambas thanks to a goal Hocine Dehiri (7th). They finish first in the group with nine points.

Mozambique in the quarter despite the defeat
As for Mozambique, it finished second in the group with four points. The Mambas will therefore see the quarterfinals despite their defeat.

In the other match of the group, Libya got a victory for the honor by sweeping away Ethiopia (3-1). Ali Nouri Mohamed (44th), Abdulati Al Dhawi (50th) and Anis Saltou (70th) scored the goals for Libya. On the Ethiopian side, Galoch Panom had opened the score from the penalty spot (39th).

The Mediterranean Knights (3 pts) finish third in the ranking before their opponents of the day fourth and last with 1 point.

In the quarterfinals, Algeria will meet the second of group B (Senegal, Ivory Coast, Uganda, DRC). Mozambique will have to face the first of group C (Sudan, Madagascar, Ghana).

The quarterfinals begin on January 27.