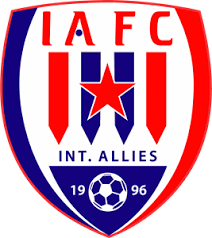 Division One league side Inter Allies football Club has been demoted to Division Two after the club was found guilty of match manipulation.

Inter Allies are believed to be involved in manipulating the outcome of their 2020/21 league game against Ashanti Gold last season.

Inter Allies and Ashanti Gold allegedly played a match of convenience when Ashantigold thrashed Allies 7-0 at the Obuasi Len Clay Stadium in a matchday 34 fixture.

In a statement issued on Monday May 16 2022, the Disciplinary Committee of the FA said,

"To protect the sporting integrity of Football in Ghana Per article 18(1) & (2) of the GFA Disciplinary Code 2019, Inter Allies Football club as a corporate entity is sanctioned as follows

a. That at the end of the 2021/2022 Ghana Premier league season, Inter Allies Clubs shall be demoted to the Division two league in accordance with article 6(3) (h) of the GFA Disciplinary Code 2019.

Inter Allies Football Club will be demoted to the Division Two after being found Guilty of Match in their 2020/21 Ghana Premier League Matchday 34 game against Inter Allies FC.

Officials and players of Inter Allies who were part of the matchday squad have also been sanctioned by the Disciplinary Committee of the GFA.

Coach Felix Aboagye of Inter Allies Football Club is banned from taking part in any football-related activity for a period of 24 months in accordance
with Article 34.5(d)(i)of the Ghana Premier League Regulations.

Team Manager of Inter Allies FC Reuben Adjetey is banned from taking part in any football-related activity for a period of 24 months in accordance with Article 34.5(d)(i)of the Ghana Premier League Regulations.

Ten players of the club have also been banned for two years each after being found guilty of match manipulation, while Richmond Lamptey currently with League leaders Asante Kotoko also handed a 30months ban by GFA’s Disciplinary Committee.

This decision shall be communicated to FIFA to be given international application in accordance with the GFA Disciplinary Code and FIFA Disciplinary Code considering that a number of players are now playing in clubs outside the jurisdiction of the Ghana Football Association.

The decision takes effect from the 2022/23 league season.

In case you have forgotten, this is the game between AshantiGold and Inter Allies last season. They have been demoted to Division two. Official and players involved fined and banned . #HappySports pic.twitter.com/JdDDDDscMr