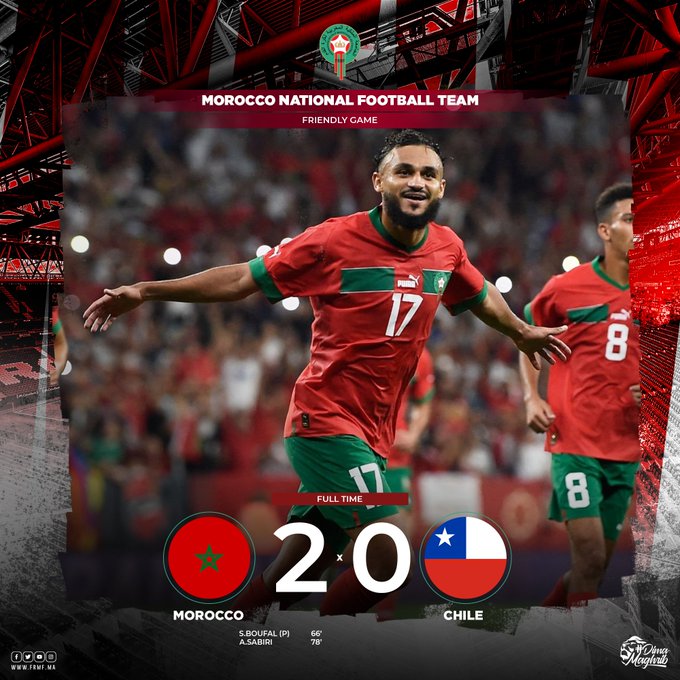 This Friday, September 23 was punctuated by several friendly matches. Many African teams were on deck for adjustments or try to achieve the feat in front of prestigious opponents. It was Ghana who was unable to contain the attractive selection of Brazil. On the contrary, Morocco offered itself a luxury victory in front of Chile.

Ghana swept away by Brazil's "yellow fever
The Black Stars of Ghana have not been able to cope with Brazil in a friendly played on Friday, September 23, in Le Havre. In front of the Auriverde armada, the Ghanaians folded three times with goals from Marquinhos (9th) and a double from Richarlison (28th, 40th). The Paris Saint-Germain star Neymar was author of two assists for Richarlison's brace.

Mali ensures the essential against Zambia
1-0 and that's all between Mali and Zambia who played a friendly match, on Friday, September 23, 2022. The goal of the Eagles was scored by El Bilal Toure in the 6th minute. The Chipolopolo ran for a long time behind this early and narrow score without effectuating any change to the score board.

Algeria shines against Guinea
We will retain the victory on the side of Algeria. The Fennecs had a hard time against Guinea before winning on Friday, September 23 in a friendly match of preparation. It was necessary to wait until the 78th minute to break the lock of the Syli thanks to the singular goal from the inevitable Islam Slimani on a service of Riyad Mahrez.

Salah smashes Niger with a hat-trick
Mohamed Salah was on fire on Friday, September 23 in a friendly against Niger. The Pharaohs striker slammed a dazzling hat-trick. Salah opened the score in the 43rd minute. And it's gone for his festival by repeating at the 55th and 67th minute of the game. Final score: Salah 3, Niger 0.

Morocco takes on Chile
Walid Regragui starts with a victory with the Morocc in a friendly. Sofiane Bouffal gave the advantage to his team at the 66th minute on penalty. Sabiri doubled the lead a few minutes later (78th).

Burkina Faso minimum service against DR Congo
Nice FIFA day for Burkina Faso. The Stallions managed to beat DR Congo, on Friday, September 23, in Morocco. The only goal of the match was scored by the returning Bertrand Traore in the 59th minute. If the Leopards of DR Congo made 6 changes in this match with the entries of Akolo (19th) Muleka (63rd), Kayembe (63rd), Lilepo (64th), Amale (87th) and Lusamva (87th), the Burkinabe made only one with Cyrille Bayala who took the place of Tapsoba (46th).

Cape Verde dominates Bahrain
The Blue Sharks dominated Bahrain by 2-1. The Cape Verdeans opened the score first thanks to a goal of Diney Borges in the 12th minute. But the locals will come back after Ali Haram equalized (29th). However, the Ilians will not give up anything and turn again in the lead with their second goal scored in the 55th. Bahrain will even finish the game with 10 men after receiving a red card in the 80th minute.

No winner between Ethiopia and Sudan
On Friday, Ethiopia was held in Addis Ababa by Sudan (1-1) in a friendly international match. The Ethiopians opened the score thanks to Shimeles Bekele, the striker of El Gounah (Egypt) in the 37th minute. But the Sudanese equalized just after the hour (62nd) by Abdelrahman Youssif Yagoub, the striker of Al-Hilal Omdurman. The two teams will meet again on Monday, September 26, still in Addis Ababa.