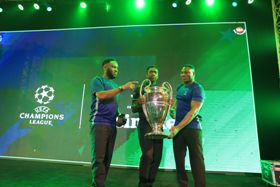 Former AC Milan star Clarence Seedorf has led the Uefa Champions League trophy tour to Africa. The former Indomitable Lions coach was on set on Super Sports show, Super Picks in Abuja Nigeria and answered some questions concerning his career as a player winning the trophy with AC Milan, Ajax, and Real Madrid.

In the presence of the trophy with the big ears, Seedorf was asked about his experiences as the head coach of the Indomitable Lions.

He guided Cameroon to the AFCON in 2019 in Egypt but lost to Nigeria at the round of 16 and he was sacked after that experience. Seedorf's main word to Africa as a continent revolves around consistency with coaches

'' I think the big issue with Africa is that they sack coaches too often without giving them time to implant themselves and make a mark on the bench.''

The hosts of the show were relentless on the Dutchman, asking if he is ever interested in coming back to Africa as a coach. Seedorf was quick to reveal he will be interested in future to return as coach. He also sited the case of Senegal as a reference for other African countries.

'' Look at what has happened with the Senegalese team. They have been together (the coaching staff) for about seven years and they showed respect and loyalty to the coach. Now the results can speak for themselves'' said the trophy bearer.

Seedorf also said he will be returning to school to add to his coaching knowledge before bouncing back on the bench. His visit that started on Wednesday was accompanied by former Super Eagles Daniel Amokachi and Jay Jay Okocha.