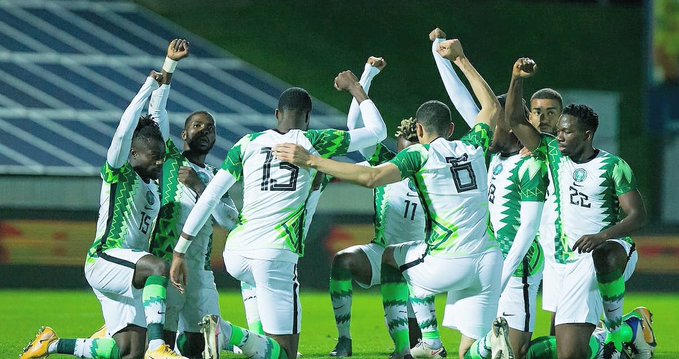 The Super Eagles of Nigeria have become the latest national team to arrive in Cameroon for the 33rd edition of the 2021 TotalEnergies Africa Cup of Nations.

Coach Augustine Eguaveon and his team flew into Central African nation on a chartered aircraft, Air Peace on the evening of Wednesday, 5 January after a two-hours flight from Abuja.

Before now, Ethiopia, Sudan, Zimbabwe, Morocco, Malawi, and Guinea had arrived in the country, thus taking the number of participants in the country to eight, including hosts Cameroon.

Since their arrival, the three-time African champions have completed their administrative and medical formalities at the Garoua International Airport before moving to their base in the North region of the country.

The Nigerian traveling delegation, comprising of 25 players including captain and most capped player Ahmed Musa, who was part of the 2013 Afcon winning squad in South Africa, moved to the lodge where they will lodge during the rest of their camping and the main tournament.

They are likely to battle Cameroon's topflight side Coton Sport of Garoua, who are gearing up for their Caf Confederation Cup campaign, in their final pre-tournament warm up match on 7 January - four days to their opener against the Pharoahs of Egypt at Roumde Adjia Stadium.

Ahead of the friendly match, coach Eguaveon is still expected three others - Al-Shabab striker Odion Ighalo, Jamilu Collins of Padeborn and Tryone Ebuehi of Venezia to join them at their base to complete a full house in Garoua.

After launching their campaign against Mohamed Salah's side, the Super Eagles will face Sudan in their second match before wrapping up their group C outing against Guinea-Bissau.