2022 Cameroon Ballon d’Or: A near clean sweep for cotonsport 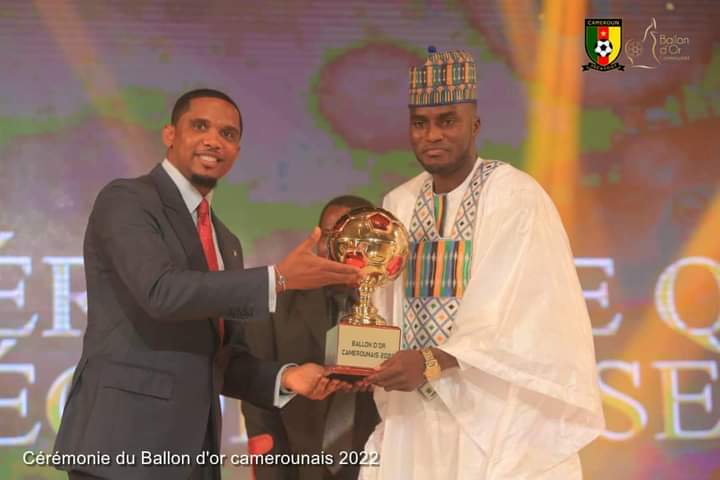 2022 Cameroon Ballon d’Or: A near clean sweep for cotonsport

The 2022 Cameroon Ballon d’Or organized at the Yaounde Congress Hall on Saturday, October 29, had Cotonsport up top as the franchise with the most winners, and quite rightly so.

The event was long overdue after being sidelined for over 7 years. It was reintroduced with spice, style and panache, with some big names in the country’s football in attendance, that included; Eto’o, Mboma and Rigobert Song, amongst others.

In a campaign like no other that saw the country heavyweights rise from the ashes to clinch a 17th crown in Garoua last term, and complete a domestic double weeks after, the Cotonnites had 5 Laureates in total, clinching personal awards, with perhaps the biggest, being the Ballon d’Or won by 23-year-old Souaibou Marou.

Marou Souaibou scored an emphatic 11 goals and dished out 7 assists in 22 appearances last term, including a sensational strike against Les Astres in the playoffs.

Gabriel Haman emerged best coach ahead of Bonaventure Djonkep and Anicet Mbarga Foe. Haman took over Cotonsport after four match days when the club was on an absolute stinker last term, and he went on to transform their fortunes and win from an ‘impossible position’, where many didn’t expect.

Anye Derrick, now of Maritzburg United was named best goalie last term with performances for Cotonsport of Garoua, that included a penalty save against Eding, which powered Cotonsport to their 17th title win.

Teenage sensation, Patient Wassou Goue won the best young player of the season award aged 17, having picked up the status of a regular, with scintillating performances for club and country.

Other winners of personal awards such as top scorer of the season, Bertrand Mani – was rewarded.

Young player of the year – Lamine Mana (AS AWA)

Goal of the year – Nkembe Enow (AS Fortuna)