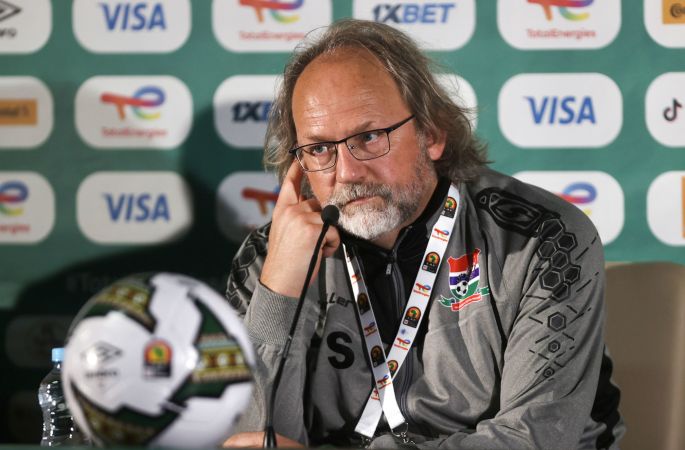 During the routine pre match press conference held at the Tagidor Hôtel in Bangou, Gambia’s coach, Tom Saintfiet accused the organizers for undermining Gambia and treating them differently from others.

The Belgian claimed that six of his players were lodging in the same room under deplorable health conditions and only two of his staff members had single rooms which was not in accordance with CAF prescriptions and what other teams were given.

Saintfiet insisted that despite their supposing small country tag, Gambia deserved to be treated with respect and that they were in Cameroon to make history.

The Senior Divisional Officer of Haut Nkam Division, in the West Region of Cameroon, went to the Vallée de Bana Hotel to have a look at the situation.

The Senior Divisional Officer discovered that every staff member of the team had a single room for themselves and just a few players shared a room between two of them contrary to the outrageous claims made by Gambia’s Belgian coach.

It should be recalled that each team is allocated 17 single rooms and 12 rooms that can be used by two people by CAF. The host hotel hands over the keys to the team upon arrival to take care of their lodging arrangements by themselves as they wish.

Gambia who are participating in the AFCON for the first time brought along a huge delegation which even encountered problems with the transportation of their luggage to Buea from the Douala International Airport. The Gambian delegation wanted that the hotel should take responsibility for the extra rooms they were asking for but the hotel declined their demand. Experience they say, is the best teacher.

Gambia will be playing this evening at the Kouekong Stadium in Bafoussam, against 1976 runners-up Guinea in the third game of the round of 16. They qualified for the knockout stage in their maiden AFCON appearance as runners-up from Limbe-Buea based Group F.