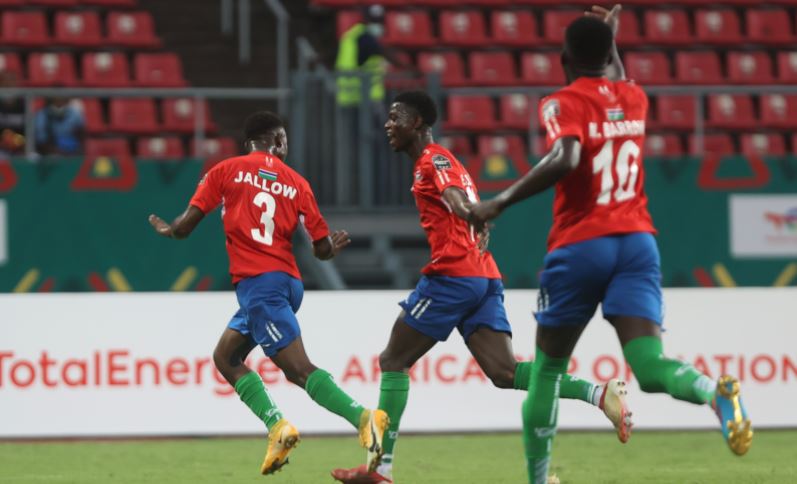 The Gambia won their first ever match at the Africa Cup of Nations finals against Mauritania (1-0). The victory of the Scorpions allows them to take three precious points in a tough group and dream of a qualification for the 8th finals.

History will remember that Gambia won their first ever match at an Africa Cup of Nations finals and that victory was scored by Ablie Jallow. The Scorpions, who are new to the competition, beat Mauritania 1-0 in their Group F opener. Tom Saintfiet's men did not start with the favor of the prognosis. But the Scorpions played their chances well and exploited their opportunities to punish the Mauritanians, who will be able to regret it.

Didier Gomes Da Rosa's men dominated the match, but showed a glaring lack of technical skill in the final moments. The Gambians did not expect much and punished this lack of realism with a classy move by Ablie Jallow. The playmaker took a pass from Moussa Barrow and slotted the ball past the Murabitouns' keeper (1-0, 10'). It was a goal for the history books, the very first goal of Gambia in the final phase of an AFCON. It was a blow to the Mauritanians who were clumsy and Aboubakar Kamara was the symbol. Twice, the Mourabitounes striker failed to find the net (25th, 38th).

The 8th final, a dream now possible
His compatriot Pape Ibnou Ba was no more successful (31st). And when it was not the lack of precision of the Mauritanian strikers, it was Modou Jobe who illustrated himself in his goal. The Gambian goalkeeper made a decisive save from a header by Pape Ibnou Ba, who was heading towards goal, to keep his team in the game (36'). After the break, the game did not change. The Gambians held their nerve to fend off the onslaught of the Mauritanians, who were as uninspired as ever. Omar Colley even came close to penalizing them from a corner, but saw the shot go wide (52').

The minutes ticked by and Mauritania played their way back into the game with the introduction of Souleymane Doukara, Idrissa Thiam and Adama Ba. These were resolutely offensive choices, but without success. The Scorpions held on until the final whistle. A historic victory, acquired thanks to a tactical disciple of all the moments. The victory allows Tom Saintfiet's Gambia to join Mali, who beat Tunisia, at the top of group F with three points and to be in the race for a qualification to the 8th finals.