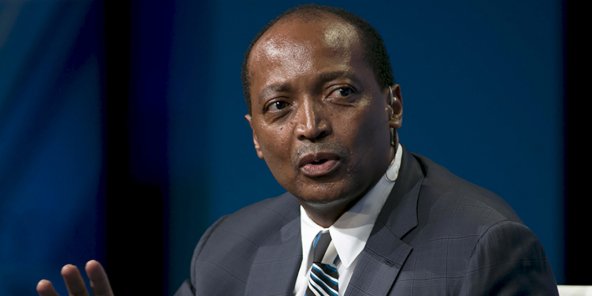 The president of CAF has drawn the first lessons on the causes of the incident that caused 8 deaths at one of the entrances of the Olembe Complex in Yaounde Monday. Faced with the magnitude of the situation, Patrice Motsepe announced strong measures.

It is a drama that has plunged the whole of football Africa into shock. On Monday 24 January, a few minutes before the kick-off of the round of 16 of the Cameroon-Comoros Africa Cup of Nations at the Olembe stadium in Yaounde, a stampede broke out at one of the entrances to the stadium. The result: 8 dead and many injured. A "dramatic incident" that is of great concern to the Confederation of African Football (CAF). "I went to the hospital to personally meet the injured," revealed Patrice Motsepe.

A closed door was the cause of the incident
The boss of the African football body drew the first lessons on the causes of this accident. "There were some failures," said the South African leader at a press conference on Tuesday in Yaounde. "This is a door that was supposed to be opened, but which is closed for unexplained reasons. If this door had been opened as planned, we would not have had the problems we have today. This is not normal.''

Olembe Stadium suspended
Patrice Motsepe is adamant that security and safety in stadiums are not to be trifled with. And faced with the magnitude of the situation, the president of CAF raises the tone: "We are in zero tolerance mode when there is an incident that causes injuries and deaths. Urgent measures must also be taken so that this does not happen again.''

In the emergency, the boss of African football announced the temporary closure of the Olembe stadium. All matches scheduled in this stadium are relocated, starting with next Sunday's game which is relocated to the Omnisports Stadium in Yaounde. "The matches scheduled at Olembe will no longer take place in this stadium until I receive the report on the causes of yesterday's incident, and guarantees that we will never again have to deplore the loss of human lives," Motsepe said.

For the time being, the South African leader does not wish to level accusations at the Local Organizing Committee of this AFCON. "The legal provisions state that security is the responsibility of the Local Organizing Committee. But we are partners. This is not the time to point an accusing finger at one party. We all have a heavy responsibility," said Patrice Motsepe. The man announces a meeting this Wednesday with Cocan and the Cameroonian authorities. A meeting that promises to be stormy. '' We will have very tough discussions," warns Patrice Motsepe. Who closed this door? Who gave the order to close it? Why did they do it? These are the questions that drive us. We have to touch the problem at the level where the failure occurred.