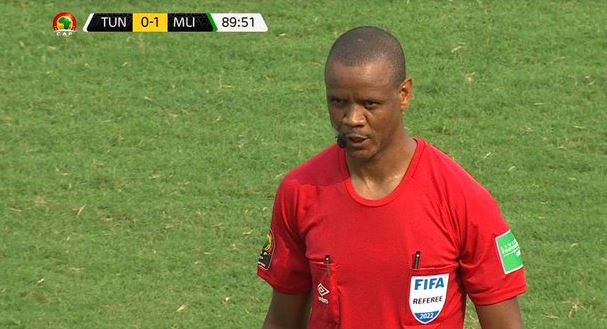 By whistling the end of the match between Tunisia and Mali before the end of the 90 minutes and without added time, Janny Sikazwe has initiated the first refereeing controversy of this AFCON 2021. The official embarrassed CAF with this decision and created an unprecedented scandal.

These images are sure to be the talked about for a while in Africa and around the world. Janny Sikazwe has undoubtedly set an unprecedented precedent in the world of football. The Zambian referee will certainly remain the man of the match between Tunisia and Mali.

4th referee and match delegates fail
If on his first decision the official changed his mind in the face of protests from the Tunisian bench and after the intervention of the 4th referee, the second one marked the definitive stop of the match in the general confusion. And for good reason, at the edge of the field, the 4th referee was about to hold up the board indicating the additional time. This caused even more confusion. At no time did his assistants or the match delegates, who were at the heart of the action, intervene to try to repair this second mistake.

It was not until more than 20 minutes after the final whistle that they intervened to invite all the players, already in the dressing room or at a press conference, to return to the field to finish the regulation time and play the stoppages. The Tunisian side was categorically opposed to this and will, barring an unlikely scenario, lodge an appeal. This will be a hot issue in the hands of the Confederation of African Football.

This same referee has once made headlines for the wrong reasons. The Zambian official had seen his name appear in a corruption case in 2018. The suspicions concerned several referees and he was suspended for the duration of the investigation. At issue were his decisions during the match between Primeirio de Agosto and Esperance Tunis in the semi-finals of the CAF Champions League. The match was marred by several errors on his part. He was reinstated a few weeks later by CAF, as the investigation had yielded nothing.

The following year, when he was approached to referee the second leg of the CAF Champions League final between Esperance and Wydad, he was rejected by the Blood and Gold. The reason? Given the events of the previous season with this suspension, the Tunisians did not want to be accused of being favored by the referee.

Sikazwe, a name that the Algerians also have bad memories of. It was still him who was in charge during the match between the Greens and Burkina Faso in 2013 in Ouagadougou, counting for the playoffs for the 2014 World Cup in Brazil. He was sadly illustrated by awarding two penalties to the Burkinabe, including a second more than contentious. The Stallions eventually won 3-2. This led to Sikazwe making the front page of many African sports media, including the daily newspaper Compétition, which will go down in history.

An international referee much in demand by the authorities
And yet, Janny Sikazwe has been an international referee for more than a decade. He has officiated at all CAF and FIFA competitions. From the U17 AFCON to the Men's World Cup and the CAF Cup, the Zambian has been part of every campaign. With this experience, he totally failed in his mission on 12 January 2022, in a continental clash that was commented on worldwide, but not for the right reasons.