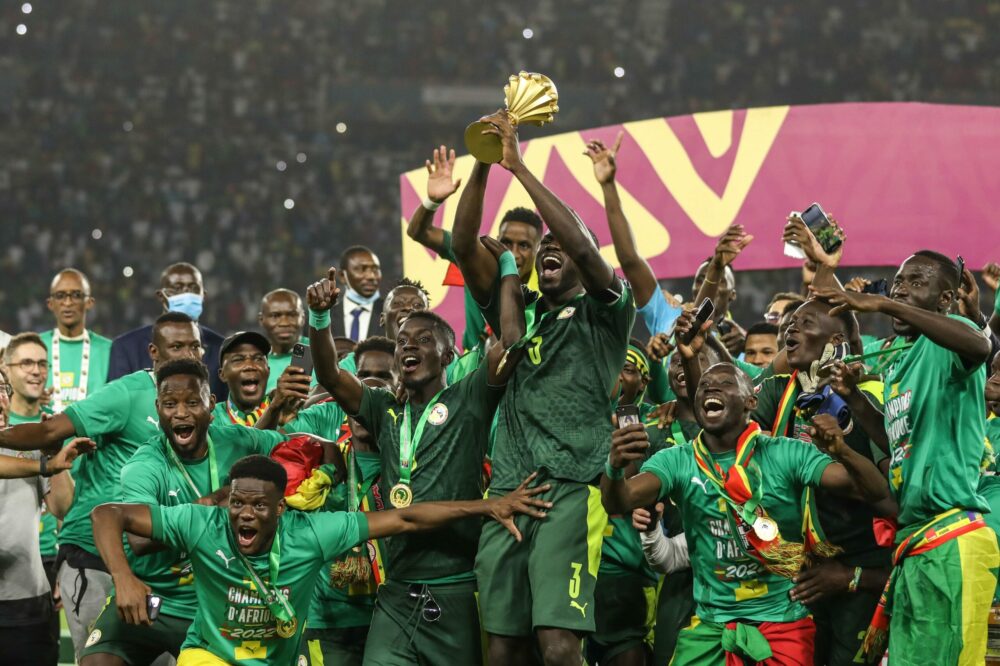 For the first time in its history, Senegal is champion of Africa. The Lions beat Egypt in their favourite game, the penalty shootout (0-0, tab 4-2). Sadio Mané scored the decisive penalty after missing one early in the game.

Finally! Senegal has won its first continental star. On Sunday, February 6, it becomes the 15th nation to win the cup. The 16th conquest will have been the right one for the Lions of Teranga. As a sign, Cameroon who broke the hearts of Senegalese in Senegal 92, Bamako 2002 and Gabon 2017 has finally been the witness of this union that will last at least until July 2023 in Côte d'Ivoire. Sadio Mané and his teammates have succeeded where their glorious predecessors of Asmara 68, Cairo 86 and Generation 2002 failed.

Senegalese star Mane kept his promise to bring the Cup back home after his failure in Egypt three years ago. After the failure against Algeria, his photo holding the Cup as if to say "I will get you one day" went viral. It has resurfaced in recent days. To certainly make his farewell and leave the place to much more cheerful photos. Because yes, Senegal did ward off fate.

Missed penalty
After two AFCON finals lost in the senior category and three in a row in the junior category, the green-yellow-red flag with the green star in the middle is flying on the roof of Africa. Senegal was rightly criticized for its mediocre games in the first round, but it improved and grew in strength in the second phase. It is at the end of the suspense that they made the difference, after 120 minutes without goal.

The Senegalese could have been ahead of the game after only five minutes when they were awarded a penalty (5th). It was the first time that Saliou Ciss, who has been playing on the left side of the pitch since the start of the tournament, got the better of the Egyptian full-back Abdelmonem, who stopped him in an irregular manner. Sadio Mané's attempt was blocked by the towering Egyptian goalkeeper Gabaski (7'). The number 10 missed the chance to become the first Senegalese to score in an African Cup of Nations final.

The Lions dominated the game without creating any huge chances, but they were still dangerous with Ismaila Sarr (17th), Famara Diédhiou (37th) and Cheikhou Kouyate (45th). The Egyptians defended well during the first 45 minutes. The Egyptians had a lot to play for in the first 45 minutes, but Mohamed Salah was able to make a great save just before the break. MS10's left-footed shot went straight into the top corner.

Sadio Mané makes amends
The second half did not see the scoreboard go up either. There were fewer chances in the second half. In extra time, Bamba Dieng (100th and 115th) and Abdou Diallo (101st) were both denied by the great Gabaski. It is finally in the penalty shootout that the decision will be made. Egypt, which has not lost in this exercise since 1984, will lose by missing two attempts. Senegal scored four, including the decisive shot by Sadio Mané. The number 10 of the Lions redeems himself and sends all 16 million Senegalese to the firmament.

The party in Dakar
This Sunday, Dakar and the 13 other regions of Senegal will not sleep. The party has already started and will certainly continue until the early hours. The fans will be waiting impatiently for the arrival of their heroes. In 2019, despite the big disappointment in Cairo, they welcomed them and escorted them to the presidential palace, singing "Amoul décourager" (don't get discouraged). "Jerejef, Sénégal Jerejef" (thank you) and "Gacce Ngalama" (you have been valiant), they will surely tell them this time.

Watch all the key moments from #SENEGY 👇 as #TeamSenegal are crowned African champions for the first time in history following a dramatic encounter against Egypt. 🦁 #TotalEnergiesAFCON2021 | #AFCON2021 | @Football2Gether pic.twitter.com/A7aKozrtU8